Daniel Joseph Ricciardo a.k.a. Daniel Ricciardo is an Italian-Australian racing driver competing in Formula One, under the Australian Flag for Renault. He debuted ay the 2011 British Grand Prix with the HRT team. His driver number is 3.

How Much Is Daniel Ricciardo's Net Worth In 2020?

As of 2020, Daniel Ricciardo's net worth is estimated at $50 million. Not to mention, the significant source of his earning is his driving career. To begin with, his salary was capped at $55 million for the two seasons 2019 and 2020 at Renault.

But this is not all. Further, the team promised him £100,000 worth of physiotherapist and medical expenses per annum with a massive $10 million year-end performance bonus. However, the bonus is dependent on where he finished in the championship. Considering he finished P9 in the championship in 2019, he might not get 100% of it.

Daniel Ricciardo will have his salary slashed in half when he moves from Renault to McLaren at the end of the 2020 season.

Under his previous contract with Red Bull, he was making $6 million per year.

Ricciardo also owns a couple of luxury cars like Ford and Range Rover whose total worth is $600,000. Back in 2015, he scored a house in Australia worth $1.1 million. In November 2018, he spent $9 million to buy a mansion in Beverly Hills.

Daniel Ricciardo has largely kept his private life a secret with only whispers. The Australian driver had been in a long-term relationship with childhood sweetheart Jemma Boskovich. However, the pair broke up in 2016. 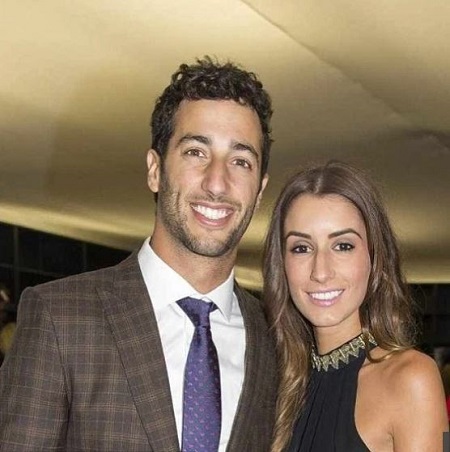 Daniel Ricciardo had been heavily linked with the Australian model Jessica Gomes in December 2018. Later, Ricciardo addressed the rumors, claiming that there was nothing going on between them.

He has since only been linked with one other woman, his former Red Bull colleague Annemarie Horbass.

At the 2011 British Grand Prix, Daniel Ricciardo made his debut with the HRT team as part of a deal with Red Bull Racing. The following year, he joined Toro Rosso. He was promoted to Red Bull as a replacement for the retired Mark Webber alongside Sebastian Vettel, in 2014. In his first season with Red Bull under Renault power, Ricciardo finished third in the championship with his first three Formula One wins, in Canada, Hungary, and Belgium.

At the 2016 Malaysian Grand Prix, he made to the top of the podium, eventually sealing third in the championship for the second time in three years at the event. Further, he won the 2017 Azerbaijan Grand Prix and 2018 Monaco Grand Prix.

On 3rd August 2018, he joined Renault, signing a two-year contract. Moreover, he is due to join McLaren for the 2021 and 2022 Formula One season alongside Lando Norris.