Daniel Maldini is an Italian footballer who is currently signed to the Serie A side Milan as an Attacking midfielder. Besides, he also plays for the Italy U-19 national team.

A native of Milan, Italy, Daniel Maldini was born on 11th October 2001, under the star sign Libra. The Italian man recently confirmed he is tested positive for the Coronivirusm amid its pandemic in Italy.

Daniel Maldini, who just turned professional, makes a weekly wage of €44,736, which is €1.7 million ($1.8 million) per annum from Milan. In the club, Zlatan Ibrahimovic and Lucas Biglia are the highest-paid footballers with an annual salary of €3.5 million. Further, he also earns a decent sum from his national team. 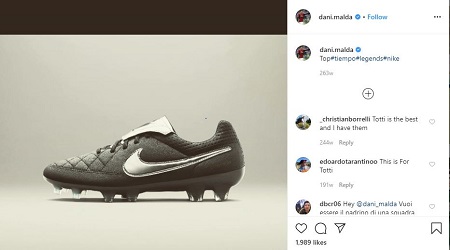 A Nike athlete, his endorsement deal must be lucrative. The hunk is often seen promoting the brand via his official socials.

Milan's No.98 attacking midfielder, Daniel Maldini, is yet to reveal his relationship status to the public. The hunk who just turned professional this year fight be focusing on his football career rather than involving in a love affair. Hence, he is possibly single.

Daniel Maldini is the son of Italian football legend Paolo Maldini. Making professional debut with Milan has continued his family's decades-long association with the club as he followed in the footsteps of his father Paolo and his grandfather Cesare, who both played for the Rossoneri during their careers.

Paolo Maldini is currently Milan's technical director and holds the Italian top-flight record of 647 league games for the club. He also won seven Serie A titles and five UEFA Champions League trophies during his stellar career. 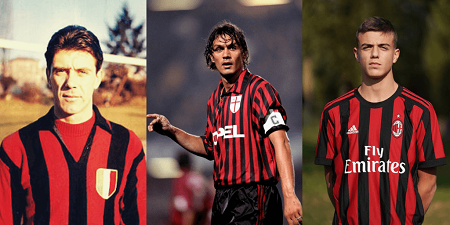 Daniel's late grandfather, Cesare, has won four Serie A titles and captured the European Cup during his career before going on to manage the club twice.

Daniel Maldini and his father, have tested positive for coronavirus on 21st March 2020. Reportedly, they have already complete two weeks at home without contact with others and now will remain in quarantine until clinically recovered.

The number of players in Italy testing positive for coronavirus is increasing daily, with Juventus star Paulo Dybala, Blaise Matuidi, and Daniele Rugani

Following various youth system at Milan, Maldini made his senior debut with the club in a 1-1 Serie A home draw against Hellas Verona on 2nd February 2020.

At the international level, he earned his first international cap at the Italy Under-18 level in a 2-0 victory against the Netherland on 22nd March 2019. Further, he represented the U-19 team in the same year.