Paolo Maldini is a former Italian professional footballer who played as a left back and central defender for A.C Milan and the Italy national team. He retired at the age of 41. Maldini is currently serving as a sporting strategy and development director for Milan.

Maldini played in defender and mildfielder position. He is considered one of the greatest defenders of all time. He spent all 25 seasons of his career with A.C. Milan. Let's take a look at his wiki to gain information regarding his career, net worth, personal life, family and more.

Paolo Maldini put his first step on this world on 26, June 1968 in Milan, Italy. He is Italian by his nationality and his ethnicity is white. Maldini also has siblings. His parents are Cesare Maldini and Maria Luisa Maldini.  Paolo Maldini's father was also a great footballer of his time.

From his early age, Paolo Maldini has shown his strong devotion towards football. He started his youth career by playing for Milan and continued with the team in his senior career as well.

Paolo Maldini is considered as one of the greatest defenders of all time. He was a world-class level defender for his team.  Maldini won 25 trophies with Milan including 2002-3 Coppa Italiana, seven Serie A Cups, five UEFA Super Cup and many more.

Paolo Maldini was not only limited to A.C Milan as he also established himself as a successful soccer player of Italian National team. He scored 7 goals in all 126 matches while playing for his national team.Maldini captained the team 74 times, only 6 lesser than Gianluigi Buffon who has the record for wearing most captain bands in Italy national team.

Maldini retired after the 2008-2009 season. Currently, he co-owns the North American Soccer League and is serving as a sporting strategy and development director for Milan.

Talking about his personal life, Paolo Maldini is a married man. He is married to a Venezuelan former model Adriana Fossa. They married in 1994 after having a loving affair. He and his spouse are blessed with two children. They have two sons named Christian and Daniel Maldini. 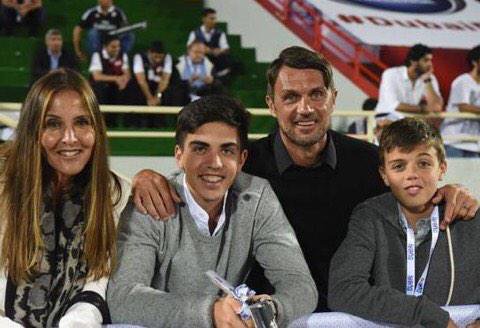 Christian plays football professionally whereas Daniel is currently involved in Milan's youth team. Maldini and his wife also involved in charity and foundations. The couple is living a blissful life with their children. There have been no rumors of their separation or divorce so far. Currently, Maldini is not linked to any controversy or rumors.

Paolo Maldini has made a fortune for himself through his successful soccer career. He has a great salary and his net worth is $26 million. Maldini has been named the fifth richest Italian athletes of 2017.

Maldini has also involved in commercials and brand endorsement. He has endorsed for the Nike. He was also featured in EA Sports’ FIFA video game series. The endorsements have added to his net worth.

Despite being 50 years of age, Paolo Maldini looks young and handsome. Many of his fans are attracted by his dynamic personality. Maldini has a height of 1.86 m and his weight is around 85 kg. People also follow him on Twitter. He is actively growing on Instagram. A bulk of info about his biography can be seen on Wiki.