Daniel James is a rising professional English football player. He rose to fame in 2019 after signing a multi-year contract with the English Premier League Club, Manchester United. Daniel plays as a winger for the team and represents Wales for the national team. James wears no. Twenty-one jerseys representing his club and country.

Daniel James was born Daniel Owen James on November 10, 1997, in Kingston upon Hull, England. He is the son of Kevan James and his wife, elaine James. His father passed away in June 2019 and did not share a word about the cause of the death.  He was raised in the nearby village of South Cave and attended South Hunsley School in Melton. James stands five feet and seven inches tall and weighs 70 kg.

Daniel started training football from a very early age. He joined the Hull City youth team and played with it until 2014. He moved to Swansea City for an initial fee of £72,000, immediately becoming part of their U18 academy side. James had become an integral part of the Swansea U23 side, who promoted the PDL Division 1. James made his professional debut in January 2016 and extended his contract until 2019.

In June 2017, James signed for League One club Shrewsbury Town for a loan. However, The loan was canceled shortly, and then he moved to Swansea City and started playing with the club. In February 2018, Daniel made his Swansea first-team debut in a FA Cup match. He made his league debut for Swansea on 17 August 2018 in a 0–0 draw against Birmingham City. In January 2019, The Welsh player had a  structured £10 million fee with Leeds United. However, At the very end, Swansea City owners rejected the deal.

In the mid-way of 2019, James signed with Premier League giants Manchester United for a reported fee of £15 million with the potential for additional payments. United officially announced the signing of James on a five-year contract, with an option to extend for a further year. Since 2019, He has appeared in forty-eight games and scored six goals.

Concerning his national team appearance, Daniel represents the Welsh national team along with Gareth Bales. James received his first senior call-up for the 2018 FIFA World Cup qualifying game against Serbia. Since then, He has represented Wales in twenty-one games.

Who is Daniel James Dating? Know About His Relationship Status and Girlfriend

Daniel James is involved in a romantic relationship with his longtime girlfriend, Ria Hughes. The love birds have been together for more than four years. They started dating each other while both of them were teenagers. Not a single word about their first meeting instance is shared in the public. 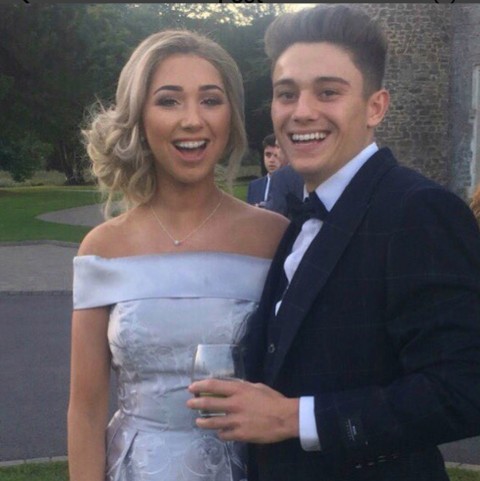 Daniel James with his girlfriend, Ria at an event SOURCE: Pinterest

In May 2021, Daniel and his girlfriend, Ria, opened about expecting their first child, a son, in September. James shared the news through a post in his Instagram timeline. Hughes works as a fitness instructor.

Daniel James has an estimated net worth of more than $10 Million. He has accumulated most of his net worth through his salary and contract with Manchester United. In 2014, Daniel moved to Swansea City for an initial fee of £72,000. As per the contract, James has an annual salary of £3 million with the United.