Daniel Caligiuri is a well-known German-Italian professional football player. He is currently playing in the German League, Bundesliga with Augsburg. Daniel plays as a Winger and Wing-back for his club and country. Caligiuri is yet to make an international appearance for his national team.

Daniel Caligiuri was born on January 15, 1998, in Villingen-Schwenningen. He is among the two children born to Pasquale Caligiuri and his wife. Daniel has a brother Marco Caligiuri, a professional football player. His father is from Italy, and his mother is from Germany. Caligiuri stands six feet in height and weighs 75 kg.

Daniel Caligiuri has an estimated net worth of more than $5 Million. He has earned most of his net worth through his football career. Daniel signed a three-year contract worth more than £4.5 Million with Augsburg. In 2022, He will receive £1,664,000 as salary. Last year, His salary was £1,768,000. Caligiuri must be making a handsome amount from his sponsorship and advertising deals. Daniel played in the Bundesliga for Schalke SOURCE: Schalke 04

Caligiuri is very open about his relationship status. Daniel walked down his wedding aisle along with his longtime girlfriend, Eleonora Caligiuri, in June 2017. They had been dating each other for several years before their wedding. The player is an active social media user and shares photos in his timelines. 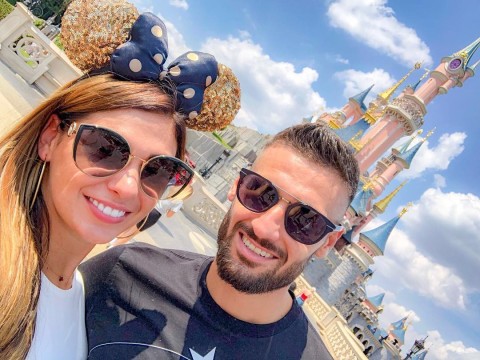 Daniel shares a photo with his wife at Disneyland SOURCE: [email protected]

In mid-2020, Daniel opened about expecting their first child. The family of two extended to three with the birth of a son in November 2020. He has shared a few photos of his son and spends his free time with them.

Caligiuri started playing football and his elder brother in their home from the early days. He joined the BSV 07 Schwenningen youth team in 1995 and trained with them until 2001. Daniel then joined SV Zimmern's youth academy. After spending four seasons with the team, Caligiuri moved to SC Freiburg and earned his professional debut with the second team in 2007.

Daniel made his professional debut in November 2009 against VfL Bochum. He had in seventy games for SC Freiburg II team until 2011. Also, The player played with its senior team until 2013. Caligiuri made ninety-three appearances and scored eleven goals. In early 2013, Daniel moved to VfL Wolfsburg.

Caligiuri signed a four-year contract with Wolfsburg. He had a good time with the club in the next four seasons and appeared in almost a hundred games and scored twelve games. In 2017, Daniel moved to Schalke 04 and signed a three-and-a-half-year deal. After spending three-season, The player moved to FC Augsburg and signed a three-year deal.