Dan Ndoye is a rising professional swiss professional football player. He is currently playing in the Swiss football league with Basel FC. Dan turned professional in 2018, playing with Lausanne-Sport II. Ndoye plays as a Forward for his club and country.

Dan Ndoye was born on Ocotber 25, 2000, in Nyon, Switzerland. He did not come from a reputed family and has not shared much about his parents and early life. Information about his education and academic qualification is under the radar. Talking about his physical appearance, Dan stands six feet and weighs 85 kg.

Dan Ndoye has an estimated net worth of more than $200,000. The player has earned most of his net worth through his short-professional career. Dan is very early in his career and will be adding millions in the future. Ndoye is pretty private about his economic career. 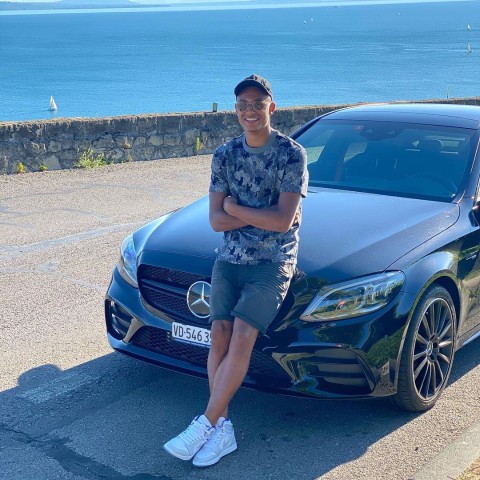 Dan shares a photo with his car SOURCE: [email protected]

Dan has not shared his earnings and salary. The average salary of a player currently playing at the FC Basel is more than $100,000. A football player has multiple sources of income. They make a reasonable sum from their sponsorship and advertising deals.

Who is Dan Ndoye Dating? Know About His Relationship Status and Girlfriend

Dan is an active social media user. He keeps sharing his personal life information about his personal life and football career. Ndoye has not shared a word about his love life. The player could be single, dating or even engaged to his wife. There is no rumor of the player dating anyone in public. He must be focusing on his career rather than spending time with people.

Dan started playing football with his parents and siblings in his backyard. He joined FC La Cote Sports academy and started his youth football career. The player represented the club in numerous divisions and moved to Lausanne-Sport. Ndoye signed his first major contract with the club and earned his senior team call in 2018. He played 38 games and scored 23 goals for the U17 and U18s. Performances that allowed him to join Team Vaud U21.

Ndoye signed his contract until the 2019 season. In his two seasons with the club, He appeared in twenty-one games, scored seven goals for the B team, and appeared in thirty-three games for the senior team. In early 2020, Dan moved to France and joined OGC Nice. The club signed him for an undisclosed fee. Ndoye appeared in sixteen games in the first season and scored three goals.

In 2020, Dan was loaned to Lausanne-Sport for the rest of the season and appeared in twelve games. In August 2021, He was again loaned to FC Basel for a season.

Dan earned his national team call in 2017 and represented the club with the Switzerland U18 team. The following year, He played for the U19 team. In 2019, Ndoye repressed the national team in the U21 squad. The player is yet to represent the club on the senior team.