D'Wayne Eskridge is a rising American football player. He plays as a Wide receiver for his team. Eskridge rose to fame after Seattle Seahawks drafted him in the 2021 NFL draft in the round two, overall 56th pick. D'Wayne was named in the First team All-MAC and Second-team All-American.

D'Wayne Eskridge was born on March 23, 1997, in Winona, Mississippi. He is among the five children born to Monique Johnson and her husband. His family moved to Bluffton, Indiana. Eskridge graduated from Blufton High School and then enrolled at Western Michigan University. D'Wayne stands five feet and nine inches tall and weighs 86 kg(190 lb).

D'Wayne started playing American football from a very early age. He played football and was a sprinter on the track team. He was named Indiana's Mr. Track and Field as a senior. The player participated in track, winning the 100 meters, 200 meters, and long jump at the Marion boys track regional in 2015 and 2016. After completing High School, Eskridge committed to play college football at Western Michigan over Ball State, which was the only other FBS program to offer him a scholarship. He was a three-star recruit going into the University.

D'Wayne played in twelve games in his freshman year. He missed contests against Buffalo and Wisconsin in the Goodyear Cotton Bowl Classic. Eskridge was part of the MAC West Division title and Marathon MAC Championship Game crown winning team. He also appeared in the Goodyear Cotton Bowl Classic. Coming into the sophomore year, D'Wayne started in all twelve games and caught 30 passes for 506 yards (16.87) and three TDs and added four rushes for 13 yards.

In the junior year, Eskridge played in eleven games but started only in seven. He missed contests against Delaware State and Georgia State. He was named Mid-American Conference West Division Offensive Player of the Week following his performance against Syracuse in the season opener. As a junior, he caught 38 passes for 776 yards and three touchdowns. D'Wayne spent the offseason at cornerback and entered his senior year as a starter on offense and defense. 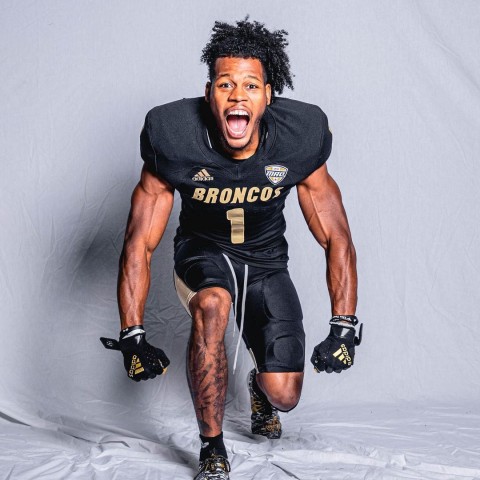 CAPTION: D'Wayne is drafted in the 2021 NFL by Seattle Seahawks SOURCE: [email protected]

Eskridge returned to playing receiver for the senior year while also taking on the Broncos' kickoff return duties. He was named first-team All-MAC as a receiver after leading the conference with 784 yards and eight touchdowns on 34 receptions and the MAC Special Teams Player of the Year. After graduating from the University, The player listed his name for the 2021 NFL draft, and Seattle Seahawks drafted him in round two. Overall 56th pick.

Know About the Net Worth, Contract, and Salary of D'Wayne Eskridge

D'Wayne has an estimated net worth of more than $5 Million. He has earned much of his net worth through his contract and salary in the NFL. Eskridge signed a $5.95 Million four-years contract. The player will receive $1.69 Million as his signing bonus.