Hernandez plays as a center-forward for his team. As per team necessities, he also plays in a right-wing and left-wing. Hernandez wears a jersey number 29 on his back for his club Wartford. Hernandez was a top scorer with 21 goals in a season of 2015/16 when he used to play in the Colombian second tier. He has scored two goals for his national team with only one appearance as of now.

Juan Camilo Hernandez Suarez, professionally known as Cucho Hernandez, was born in Pereria, Colombia, on April 20, 1999. According to an astrologer, Hernandez's sun sign is Taurus.

Cucho has been a nickname for Hernandez since he was two years old, when his father shaved his head, causing him to be likened to Esteban Cuchu Cambiasso, a notable Argentine soccer player at the time. 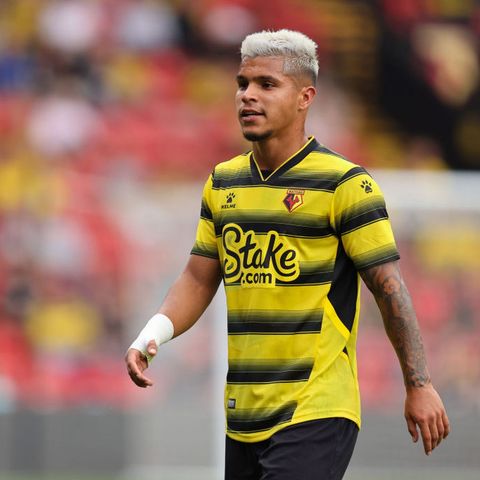 Hernandez father's name is Yaneth Suarez and mother's name is Nestor Hernandez. Their occupation details are not known, and they are originally from Colombia.

Cucho has short and gingered hair and brown eyes. He measures 5 feet 9 inches tall, and he weighs 70 kg. As a football player, Hernandez maintains his muscular body.

Also, read the biography, relationship status, and net worth of Oslimg Mora.

Cucho's net worth, salary, and contract

Cucho, a striker with the Wartford, has played for assorted football teams at varying levels during his career. As of 2022, he is with Wartford FC.

Cucho's market value is €9.00M. As per the transfer market, Cucho's highest market value was €12.00M in 2019. Cucho's net worth as a professional football player is $4 million. According to sportrac, Cucho Hernandez is now earning an assured salary of £870,000. His estimated career earning is £870,000. Cucho's contract detail with Wartford is not known as of now.

Also, know about Eryk Williamson's biography and net worth.

Cucho Hernandez is a footballer that is outspoken and combative. Previously Chucho was in a relationship with Colombian Instagram star and Gym influencer Daniela Zapata. They were in a relationship for four long years, and later they broke up with each other. But now, he keeps silent when it comes to his relationship status. Cucho has been mum about his love relationship. So, Cucho might be single or in a secret relationship as of now.

Hernández was called up to the senior team for two friendlies against the United States and Costa Rica on September 29, 2018, after representing Colombia at the 2017 South American U-20 Championship.

On the 17th of October, he made his full international debut, replacing Carlos Bacca and scored a brace in a 3–1 victory over the latter at the Red Bull Arena in Harrison, New Jersey. Hernández also represented Mexico at the FIFA U-20 World Cup in 2019, scoring a hat-trick against Tahiti.