Crystal Simone Dangerfield, a.k.a. Crystal Dangerfield is an American women's basketball player who is currently signed to the Minnesota Lynx of the WNBA. Following an impressive high school career that made her the nation's top-ranked point guard, she finished her collegiate career at the University of Connecticut Huskies of the American Athletic Conference.

Murfreesboro, Tennessee native, Crystal Dangerfield, was born on 11th May 1998, under the star sign Taurus. She holds an American nationality and is of Afro-American ethnic background. Further, the twenty-two years old stands 5 ft 5 in (1.65 m).

How Much Is Crystal Dangerfield Net Worth In 2020?

Crystal is a new face in professional basketball and is yet to make big in this field. As of 2020, her net worth is under review.

Besides, she engaged in various charities such as Let's Move!, Foundation for Life "Bikes for Kids," Athletes for Hope, and food banks. Dangerfield helped Bags of Love give toiletries to homeless people in Hartford, Connecticut, during her college days.

Is Dangerfield Lesbian? Who is her Girlfriend?

Crystal Dangerfield is an openly lesbian and is currently in a relationship with her girlfriend, Michelle. Though they are yet to come out with their love story, Crystal and Michelle are not shy to flaunt their love on their respective IG. 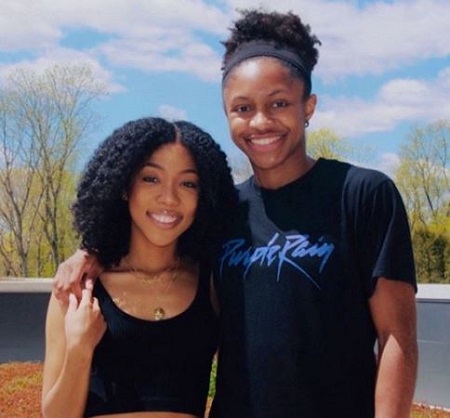 Michelle also attended the University of Connecticut. Probably, they had met there and started dating since their college days.

Crystal was born to Christopher and Davonna Dangerfield of Murfreesboro, Tennessee. She was raised alongside her elder brother Komar, and one sister, Brooke. Both parents served in the U.S. Army. She started playing basketball since her five, and her favorite players are Kobe Bryant and Maya Moore.

Dangerfield enrolled at Blackman High School, where she played basketball for the high school team. Among the women's class of 2016, ESPNW ranked Crystal as the best point guard and third overall of 100 women players. The Connecticut Huskies recruited her, and she studied business and majored in communication at the University of Connecticut.

At the 2020 WNBA Draft, Crystal was picked by the Minnesota Lynx with the 16th overall pick in the 2nd round. She was the starting point guard, averaging 14.3 points per game, shooting 47.1% from the field. She was considered a candidate for WNBA Rookie of the Year.

She earned WNBA's formal recognition with a Rookie of the Month award in August 2020 for her record of 18.1 points per game, 3.5 assists per game, and 2.0 rebounds per game.