Some people are fortunate that they come to global recognition after their partner becomes successful in their profession. Crystal Corey, better known as the wife of a Canadian professional ice hockey player for the Toronto Maple Leafs, Wayne Simmonds, shares a similar story to her rise to fame.

Since Corey did not come from a reputed family nor was into the limelight from an early age and there is not much information about her early life. Unlike other players' wives, Crystal does not show much social media presence and has become successful in keeping her personal life away from the media.

Crystal tied her wedding knot with Wayne in November 2018 At Four Seasons Toronto. The love birds had been engaged for some time before tying their wedding knot. Wayne Simmonds popped the question at the mountain top in Vail, Colorado, and she accepted the proposal right away. 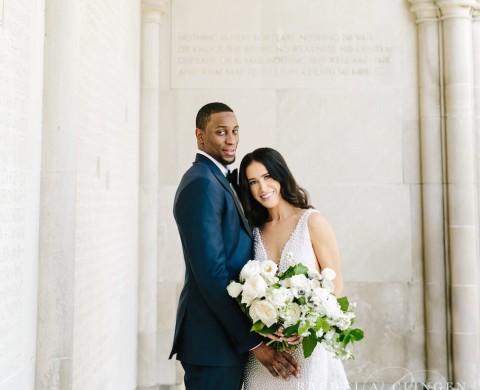 The wedding photo of Crytal and Wayne SOURCE: Rachelaclingen

Crystal and Simmonds had a lavish wedding ceremony. The event manager had a modern Wedding canopy for the couple with a chrome linear structure. A chic black and white palette gave their wedding an edgy look while maintaining pure sophistication.

For the memorable day, the Bride wore a sleeveless white gown, and the bridegroom wore a white shirt with a black bow tie and a blue coat with a black liner in color. The pair had invited more than a hundred guests to their wedding. The love birds welcomed a daughter Kori in 2019. Wayne has become successful in keeping his family away from public pressure. He has not shared much about his daughter in public.

Crystal is yet to share information about her economic status. She must be living a happy life through her husband's successful career. Wayne has an estimated net worth of more than $5 Million. He has accumulated most of his net worth through his successful career in Ice Hockey and has been lately playing with Toronto Maple Leafs under a $1.5 million contract for one year.

Wayne started his professional career in 2008 with Los Angeles Kings. He left the team and joined Philadelphia Flyers with a two-year contract with an average $1.75 million salary. In 2012, the Flyers signed Simmonds to a six-year extension worth an annual average value of approximately $4 million.

Simmonds started playing ice hockey with the Minor Midget Toronto Aces in the 2003–04 season. In his junior years, Wayne played for Canada at the 2008 World Junior Ice Hockey Championships. Los Angeles Kings drafted him in the 2007 NHL Entry Draft. He had an excellent start to his career with the team but could not sustain it. In 2011, The player moved to Philadelphia Flyers and played there until 2017.

In 2018, Wayne signed with Nashville Predators and had a good season. In the following season, Simmonds signed a $5 million contract with New Jersey Devils.

In 2020, he was transferred to Toronto Maple Leafs.