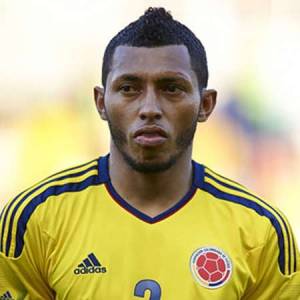 Cristián Zapata is a professional footballer from Colombia who currently plays as center-back for National team of Colombia and Italian club A.C. Milan. The 31-year-old footballer has previously played for Deportivo Cali, Udinese, and Villarreal.

Zapata is the member of the Milan team that won 2016 Milan Supercoppa Italiana. He is best-known for his hard marking of opponents and strength in the air.

Cristián Zapata was born as Cristián Eduardo Zapata Valencia on September 30, 1986, in Padilla, Colombia. He was born to his father, Jose, and mother, Ana Valencia. Regarding his nationality, he is Colombian and belongs to Afro-American nationality.

Zapata used to play football in the dusty streets of El Tambor in his childhood. He moved to Italy when he was 18.

Cristián Zapata began his career as a member of the Deportivo Cali U-19 team. In 2004, he was promoted to a senior team but soon left the club after making 17 appearances.

On August 31, 2005, Zapata was transferred to Udinese along with his team-mate, Abel Aguilar with the transfer fee of £450thousand.

On September 18, 2006, Zapata renewed his contract with the team for next five years. He, along with Andrea Dossena, Roman Eremenko, and Simone Pepe, was awarded new contracts until June 2012.

Zapata left the club in 2011 after making 168 appearances scoring 5 goals. On July 12, 2011, Zapata moved to Villarreal CF with the transfer fee of £8.10million and made his debut in a Champions League qualifier. For the club, he played 28 games.

In February 2017, Zapata held the captain position in a 0-1 home defeat against Sampdoria, due to the absence of Riccardo Montolivo. He has so far scored 3 goals in 94 appearances.

Cristián Zapata made his international debut with the Colombia U-17 with whom he played 2 games.

Zapata then played 4 games for Colombia U-20 team and was able to win the 2005 South American Youth Championship.

On September 12, 2007,  Zapata earned his first senior cap under the coach, Jorge Luis Pinto. He is the member of the team that won the bronze medal in 2016 Copa America along with Stefan Medina. He met with an injury in 2016 in the group stage of the Copa América Centenario against Paraguay. He was replaced by Yerry Mina in the 84th minute but was out for 9 months.

Cristian Zapata scored his first international goal against United State in Copa America Centenario. He has been capped 54 times for his national team scoring 2 goals.

Cristian Zapata has a sister. He is active on Instagram with more than 519k followers. He stands at 6 feet 1 inch and is weighs above 82kg.

His aunt Limbaina Zapata was kidnapped with a demand of $150 million back in 2013. However, she was later released by police.