Courtney Ramey is a rising American college basketball player. He has been playing in the Big 12 Conference for Texas Longhorns. Courtney is currently in his junior year. Ramey won the Mr. Show-Me Basketball award in 2018 and was in Third-team All-Big in 2021. Courtney is among the top prospects for the 2021 NBA draft.

Courtney Ramey was born on October 2, 1992, in St Louis, Missouri. He is among the three children born to Terrell Ramey and his wife, Angie. He has an older sister, Charmange, and one younger brother, Terrell Jr. His father is a basketball coach at the Amateur Athletic Union team. Talking about his physical appearance, Ramey stands six feet and three inches tall and weighs 84 kgs(185 lb).

Courtney comes from athletic family background. He started training with his father, Terrell, from a very early age. The player played basketball for his High School team of Webster Groves High School. As a junior, he averaged 20 points, eight rebounds, and six assists per game, leading his team to the Class 5 state championship. This led him to be named St. Louis Post-Dispatch Player of the Year. 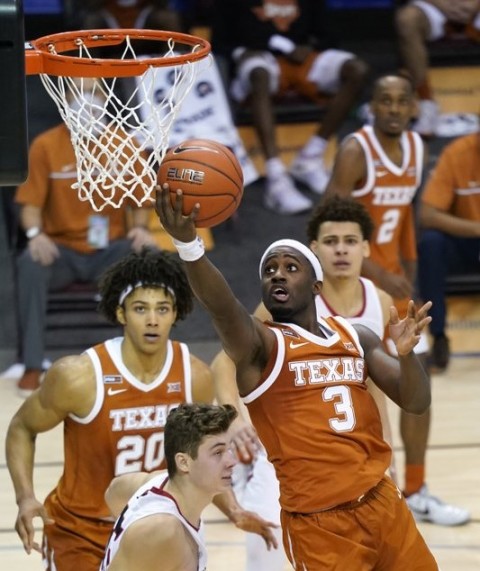 CAPTION: Ramey jumps to score a point during a match SOURCE: Card Chronicle

Several universities, including Louiseville, Missouri, Oklahoma State, Texas, approached him with numerous scholarships. He initially committed to playing for Louiseveille but later transferred to Texas. In his freshman year, The player averaged 8.1 points, 3.3 rebounds, and 3.1 assists per game, helping his team win the 2019 National Invitation Tournament. In the sophomore year, Ramey averaged 10.9 points, 3.9 rebounds, and 2.9 assists per game. As a result, He was named to the All-Big 12 honorable mention.

Many experts are expecting Courtney to list his name for the upcoming 2021 NBA draft. However, He has not given a final decision. Sandro Mamukelashvili and Neemias Queta are two other top NBA draft prospects.

Unlike other college basketball players, Ramey does not show much presence on social media. He has become successful in keeping his personal life away from the public. There is no word about his girlfriend which seems like Courtney is very much focused on his career rather than spending time with people.

In early 2021, Ramey opened about the reason he wears the number 3 jersey. He has it to honor three people close to him who died during his childhood: his grandmother, mother, and best friend, Alvin.

How Rich is Courtney Ramey? Know About His Net Worth,  Earnings, and Contract

St. Louis Native Ramey is currently playing for his college team, and as per the rules, College players are not allowed to receive any form of payment. The average salary of an NBA rookie player is more than $7 Million. He will be landing a major contract if he enlists his name for the upcoming draft. Courtney has kept his economic stats away from the media.