Corentin Tolisso is a professional footballer who plays for the Bundesliga league Club Bayern Munich. He plays as a center midfielder in the club and also plays for the France national team. Robert Lewandowski, world-famous, also plays as a forwarder, and both of them play together.

Corentin Tolisso's Net Worth and Salary Similarly, his monthly pay is $655,507.42 as well as his annual income is $7,866,089.00. He has various cars and one of them is Mercedes which he often flaunts on his Instagram. He is a traveling person and loves to travel to new places.

Tattoos and their Meaning

Bayern Munich player Tolisso poses a lot of tattoos on his hand as other football players. He has a tattoo of a compass on his upper arm, and it is also surrounded by a quote, "Never Forget Where You Came From." The compass says about time, whereas the quote says about his hometown, Tarare, and people shouldn't forget his roots and hard work.

Similarly, he has also played card tattoo "P" with clubs and the "M" with a heart representing his parents, Vincent and Marie-Chantal, whom he loves very much. And he also has a Lion tattoo inner side of his left forearm, representing his family.

He also has a "T" tattoo on his upper left wrist, which represents his family name Tolisso and there are also other small pieces of art on his hand which doesn't have any special meanings.

Tolisso's Relationship; Who is his Girlfriend? So, he is not single and is dating a girl named Sarah.

Corentin Tolisso is pretty much active on social media. He has 1.2 million followers on Instagram with 274 followings, including the world's greatest players, Cristiano Ronaldo and Lionel Messi. He has also followed Conor McGregor, one of the greatest UFC fighters. 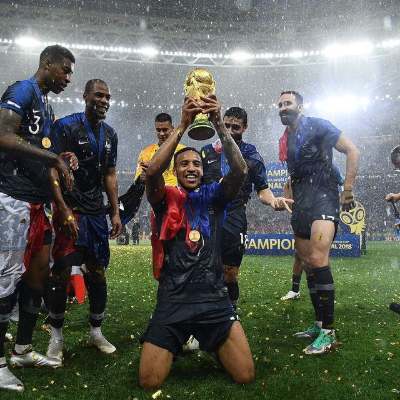 On the other hand, he has 289.2k followers and 138 followings, with 415 tweets. So, he is pretty much active on Social media in his free time.