Conor John Gallagher a.k.a. Conor Gallagher is an English football player currently playing side Swansea City on loan from Chelsea. Besides, the midfielder is representing England U21 national team, having previously represented England U 17, U 18, U 19, and U20.

Reportedly, premier league side Crystal Palace are showing interest in signing Chelsea starlet Conor Gallagher, who has impressed in the Football League this season. According to reports, a fee in the region of £10m is believed to be enough to secure his services.

A native of Epsom, England, Gallagher was born on 6th February 2000, under the star sign Aquarius. The twenty-years-old holds an English nationality and belongs to the white ethnic background.

How Much Is Conor Gallagher's Net Worth & Salary?

A professional since 2019, Gallagher has earned a decent sum of money through his career. Currently, he is signed to Championship league side Swansea City A.F.C where the average salary is £4,753 a week. Earlier this season, he played on loan for another championship league side, Charlton Athletic F.C. where the player makes £3,500 per annum.

Furthermore, he receives a considerable amount as a salary from England U 21 national team. Also, most of the footballers earn from endorsement deals. However, Gallagher is yet to talk about his endorsement deals.

Conor Gallagher, 20, is currently in a relationship with his girlfriend, Annie May, a Youtuber and model. The two are yet to come out with their love story. There is no information as such when they started dating or where they met but thanks to socials, Gallagher shared their first photograph in April 2019. 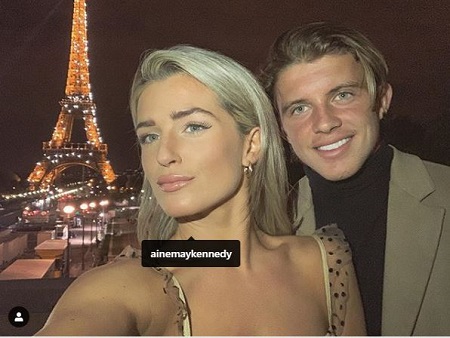 Scrolling through their IG, they often post their adorable pictures via their respective account. The couple went to Paris and Disney land in 2019 to spend their holidays.

Gallagher who started playing football very young age enrolled at Howard of Effingham School. He grew up alongside his elder brothers: Daniel and Jordan are also footballers, who played in non-league.

Furthermore, Gallagher's family are Chelsea fans. He said, his family burst into tears when he scored his first Charlton goal. Earlier, the footballer lived a 10 minutes drive from their training ground in Cobham.

Joined Chelsea At The Age Of 8

After playing for Epson Eagles, in 2008, Gallagher joined Chelsea. After playing for various Chelsea youth systems, in October 2018, he finally signed a new contract with the senior team until 2021, joining the team alongside Antonio Rudiger, Pedro, and Cesar Azpilicueta. That year, he had minor heart surgery.

Again in August 2019, she signed an extension contract with Chelsea and moved on loan to Charlton Athletics. On 14th January 2020, he was called by Chelsea, and the following day, he joined Swansea City on loan for the rest of the 2019–20 season.