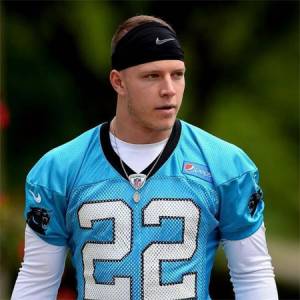 Christian Jackson McCaffrey, better known as Christian McCaffrey is an American football return specialist and running back for the Caroline Panthers of the National Football League. Following impressive football college career with Stanford Cardinal football team, he was picked by the Carolina Panthers in round 1 in the 2017 NFL Draft.

As per his current contract, he receives around $3.1 million as his yearly earnings from the club. As of 2018, his current net worth is reportedly around $5 million but with the expensive deal signed with Carolina Panthers worth $17.2 million along with the signing bonus of $10.7 million his net worth in 2019 is expected to be well over $8 million.

As of 2018, his current net worth is reportedly around $5 million but with the expensive deal signed with the Carolina Panthers, his net worth in 2019 is expected to be well over $8 million.

Apart, the hunk owns BMW and Mercedes Benz for riding.

Christian is unmarried. However, he is rumored to be dating Olivia Culpo. The couple was seen together in Mexico vacationing with some of their friends. The NFL player and the TV personality reportedly met each other through a mutual friend and have been together since then.

The NFL player earlier dated Brooke Pettet since their time at Stanford. Brooke is a student of journalism and attended the Walter Cronkite School of Journalism from 2013 to 2017. She is a Denver native.

Christian previously dated Marybeth Sant who ran track at Oregon. Christian and Marybeth called off their relationship in around May 2015. His current girlfriend Brooke is believed to be a close friend of his former girlfriend.

He is extremely active on social networking sites such as Instagram and Twitter and has posted numerous photos with his family but has not spotted with any lady who could be his possible girlfriend and wife.

His father Ed McCaffrey is a former professional footballer who was a wide receiver in the National Football League for the 13th season and Lisa Sime who played soccer at Stanford.

McCaffrey grew up with his older brother Max, who is now a wide receiver with the NFL’s wide receiver for the San Francisco 49ers, younger brother, Dylan, for Michigan Wolverines football, and his youngest brother, Luke, a high school quarterback in Colorado.

21 years old American footballer, McCaffrey belongs to a Sports family. His maternal grandfather Dave Sime is an Olympic track star. He stands 5 feet 11 inches tall with a bodyweight of 93 kg.

He was selected as a 2014 U.S. Army All-American considering one of the best hundred football players in his national high school class. By Rivals.com McCaffrey was rated a four-star recruit and ranked as the third-best all-purpose back in his class and 77th best player overall.

As Christian McCaffrey committed to Stanford University to play college football, he debuted there in the year 2014. He finished the year playing all games, making 300 rushing yards on 43 carries, 251 receiving yards on 17 receptions along with 2 touchdowns.

The following year he had a breakout sophomore season. Further, finishing with 3,864 all-purpose yards, he broke Barry Sanders’s NCAA record. For the year, he was the Associated Press College Football Player of the Year, Paul Horning Award winner, and Pac-12 Player of the Year.

On 4th of May 2017, the Carolina Panthers signed Christian McCaffrey with a four-year $17.2 million contract along with the signing bonus of $10.7 million respectively. He made his NFL debut recording 38 receiving yards, 47 rushing yards, as well as one lost fumble in a 23-3 road win against the San Francisco 49ers.

Again in Week 5 against the Detroit Lions, he scored his first ever career touchdown on a 6-yard shovel pass from quarterback Cam Newton.

Furthermore, in 2018, he appeared on a new commercial for the NFL along with DeAndre Hopkins, Jay Ajayi, and Todd Gurley.