Christian Barmore is an American defensive football defensive tackle who was picked by the New England Patriots of the National Football League (NFL) in the 2021 Draft with 38th overall. He finished his collegiate career at Alabama.

Philadelphia, Pennsylvania native, Christian Barmore was born on 28th July 1999, under the star sign Leo. The twenty-nine years old holds an American nationality and is of Afro-American ethnic background. He stands 6 ft 5 in (1.96 m) tall and weighs 310 lb (141 kg).

How Much Is Christian Barmore's Net Worth In 2021? Salary & Contract

Christian Barmore as of now has not earned a tremendous sum from the NFL but will soon. As of 2021, his net worth is under review.

There is less to no information if Christian Barmore is dating or single. No media has published his love life. But one thing is sure, Barmore is a mama's boy. Right after being draft, he took Instagram and posted an adorable picture with his mother and captioned, "I Did it All For U Momma Barmore." 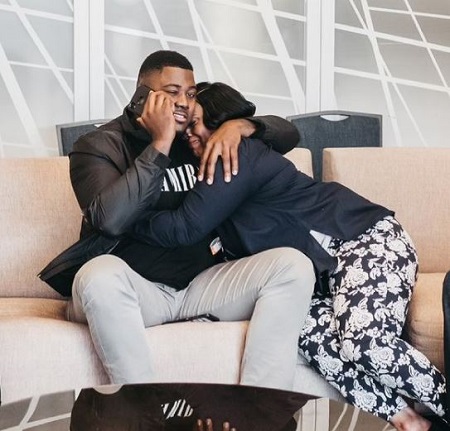 And nothing can be sexier than a man flaunting his love to his mother and telling showing it to the world.

Neumann Goretti To Alabama To NFL

Grew up in Philadelphia, Pennsylvania, Barmore enrolled at  Abraham Lincoln High School and was later transferred to Saints John Neuman and Maria Goretti Catholic High school before his freshman year. A consensus four-star prospect, he originally signed to play college football for Temple during the summer going into his senior season. However, he later de-committed to Temple and re-opened his recruitment, and ultimately committed to Alabama over offers from LSU, Baylor, Georgia, and Florida.

Barmore at Alabama in a redshirt freshman season, he appeared in 12 games, making 26 tackles, and was named to the SEC All-Freshman team. As a redshirt, he was named first-team All-SEC, after concluding the season with 37 total tackles, 9.5 tackles for loss, and eight sacks. Further, Barmore was the Defensive MVP of the 2021 College Football Playoff National Championship game following his five tackles.

After the season, he announced for the 2021 NFL Draft, forgoing his remaining two years eligibility. At the draft, he was picked by the New England Patriots in the 2nd round, reuniting with his former coach Mac Jones.