Catherine Harrison is a rising American professional tennis player. She is currently playing at the professional level since 2016. Harrison has won one ITF Singles title and eight ITF Doubles Titles in her professional career. Catherine was part of the University of California Los Angels tennis team.

Catherine Harrison was born Catherine Elizabeth Frances Harrison on April 9, 1994, in Memphis, Tennessee. She is the daughter of Kent Harrison and his wife, Jan Harrison. After graduating from Laurel Spings Online High School, Harrison enrolled at the University of California, Los Angels. Talking about her physical appearance, Catherine stands five feet and five inches tall and weighs 55 kg.

Catherine Harrison has an estimated net worth of more than $100,000. However, Harrison has spent almost a decade in her professional career but is yet to make a major leap in her economic conditions. She has earned most of her net worth through her ITF and WTA career. 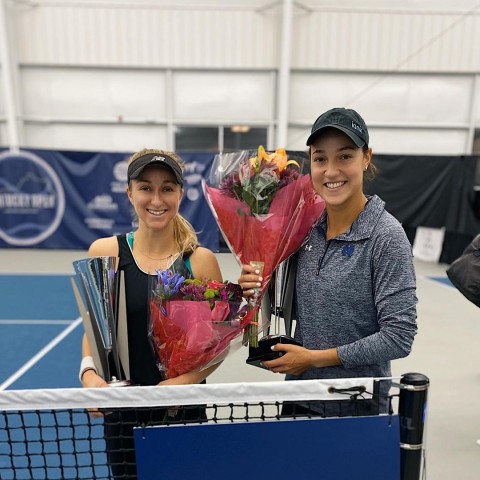 Catherine shares photo with her Doubles title in the left SOURCE: [email protected]

Totaling her prize money from the tennis matches, it sums to $83,774. She is very early in her career and will be adding much more to her net worth in the coming days. Harrisons spends most of her time in the ITF Circuit and has earned a hefty sum about which she is yet to share a word.

Catherine is very much open about her relationship status. She keeps sharing numerous photos with her boyfriend in her Instagram timeline. Harrison is involved in a romantic relationship with her longtime girlfriend, Logan Staggs. The love birds have been together for more than four years. In recent times, the number of posts of her boyfriends has decreased. Catherine has not shared about their first meeting experience. Logan is also a tennis player, and we can assume that they must have met each other on a tennis court. Although it's been more than four years of their relationship, they are yet to get engaged or tie their wedding knot. Harrison is beginning to show her talent in her career and must be waiting for the right time to get engaged and walked down their wedding aisle.

Catherine started playing tennis during her High School days. She got a scholarship to play for the University of California, Los Angeles Tennis team. Harrison participated in three of the four Junior Grand Slams.  In her senior year, Catherine earned All-America honors in singles and doubles. She turned professional in 2016, right after graduating from the University.