Paula Badosa is a rising Spanish professional tennis player. She has been playing in the professional league for more than three years. Badosa made her but in the ITF Women's Circuit in 2012 but made her breakthrough only in the 2018 season. Paula has won a WTA title and seven ITF titles in her single career.

Paula Badosa was born Paula Badosa Gibert on November 15, 1997, in New York, United States. She is the daughter of Josep Badosa and his wife, Mireia Gilbert. Both of her parents worked in the world of fashion. Paula moved to Barcelona along with her parents at the age of seven. Badosa stands five feet and eleven inches tall and weighs 70 kg.

Paula Badosa has an estimated net worth of more than $1 Million. She is very much early in her career and shall be making millions in the future. A tennis player does not need to win an event to earn money, and they are paid based on the round they reach in the tournament. Badosa has already made $626,470 in the ongoing year of 2021. 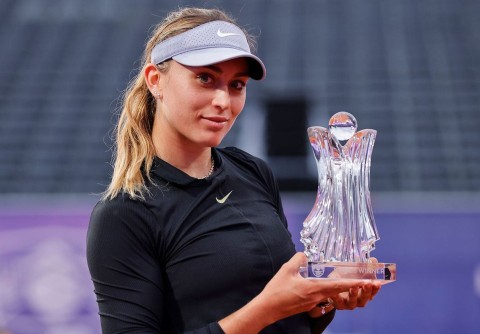 Totaling her career earnings from tennis, it sums to $1,496,037. Also, A tennis player earns a hefty sum through her sponsorship deals and advertising deals.

Paula is an active social media user. She keeps sharing a lot of her pictures in her Instagram timelines. However, The Spanish tennis player has not shared a word related to her love life. There are no reports about Paula having an official boyfriend. The only guy that appeared on her Instagram is fashion model Joshua Sorrentino. None of them have shared a word about the relationship.

Paula is very close to her coach Javier Marti, and some rumors suggest they be dating each other. Paula might be waiting for the right partner to fall in love.

Paula started training tennis from a very early age. She is a former junior world No. 8. She made her debut at the ITF Junior Circuit in September 2012. In 2014 Badosa won her first junior singles title at the Grade-1 Mediterranee Avenir in Casablanca. Paula completed her junior career with three singles titles and one doubles title on the circuit.

Paula got her breakthrough in 2018 when she reached the semifinals of the WTA Challenger Karlsruhe Open. At the end of the season, Paula won the $60K Open de Valencia. In the following years, Badosa reached in top position in numerous international events. In 2020, She reached the semifinal at the Madrid Open and became the first Spanish woman to reach. In 2021, Paula won the Charleston open against Ashleigh Barty.