Carson Ware was born Carson Reed Ware on February 28, 2000, in Jamestown, North Caroline. He is the son of Rick Ware and his wife. His father is a professional racecar driver and owner of Rick Ware Racing. Ware has an elder brother named Cody Ware, an American auto racing driver and has experience in a stock car, sports car, and open-wheel racing. Carson stands six feet and one inch tall and weighs 85 kg.

Short Career Before Suspension By NASCAR

Carson started driving with his brother and father from a very early age. He competed in Pro Late Models before turning professional in 2019. He won numerous amateur events. In October 2019, Ware made his ARCA debut at Kansas Speedway with Rick Ware Racing. The next month, Carson raced at the Lucas Oil 150 at ISM Raceway with Reaume Brothers Racing and his first NASCAR Ganders Outdoors Truck Series. 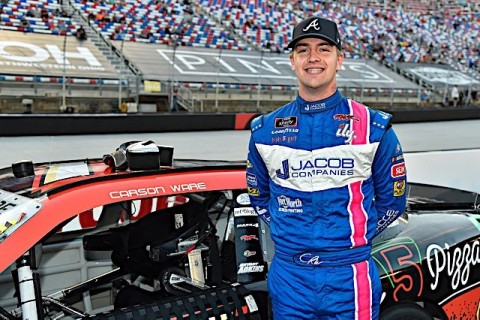 Carson shares a photo with his car at an event SOURCE: [email protected]

In mid-2020, Ware signed with NASCAR Xfinity Series and made his debut at Bristol Motor Speedway. He did get to race in eight more events in the two years. In October 2020, Carson got arrested with a charge of assault and property damage. Shortly after that, NASCAR indefinitely suspended him. None of them have shared a word about the incident.

Update on the Arrest

As per sources, Carson was intoxicated after partying with Kenneth Evans, the crew chief and operations director at Rick Ware Racing. At midnight then, Evans and his girlfriend asked him to rest and sleep, He got physical, and the couple called 911. Ware’s bond was set at $1,000, with a court date of November 19.

Who is Carson Ware Dating? Know About His Girlfriend and Relationship Status

Carson is believed to be single as of 2021. He is an active social media user and keeps sharing his photos regularly but has not shared a word about his relationship status. Ware's timeline is filled with photos of his events, family, friends, and cars. Ware is very much early in his career and must be focusing on his career.

Know About Carson's Net Worth and Earnings

Carson is enjoying a lavish lifestyle through his father's successful business venture. Also, Ware turned professional in 2019 and must make a handsome amount as his salary and endorsement deals. The salary ranges from $21,364 to $577,997, with a median salary of $103,858. The driver is very much early in his career and will be making millions in the future.

Carson's father, Rick Ware, has an estimated net worth of more than $10 Million. He has made most of his fortune from his stock car racing organization and venture. His brother Cody has an annual salary of more than $1 Million.