Cameron Champ was born Cameron Mackay Champ on June 15, 1995, in Sacramento, California. He is among the four children born to Jeff Champ and his wife, Lisa Champ. Cameron has two sisters, Madison and Melissa, and a brother Brent. His father played two seasons of professional baseball in the Baltimore Orioles organization. Champ is of mixed black and white descent and holds American nationality. Regarding his physical appearance, Cameron stands six feet and weighs 81 kg.

Cameron Champ's Net Worth and Earnings

Cameron Champ has an estimated net worth of more than $5 Million. Champ has numerous sponsorship deals with SAP, Ping, First Republic Bank, Mikuni Sushi, and others. Although It's been just four years of his professional career, He is ranked among the best-youth players in the league. 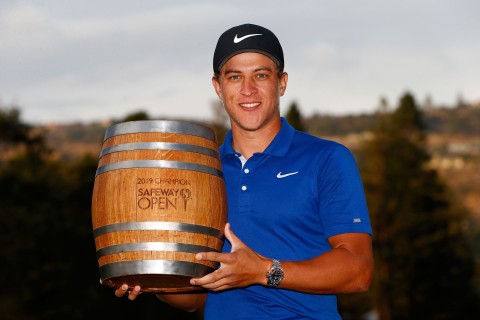 Cameron is very much early in his career and shall be adding much more to his name in the future. Totaling his prize money from PGA events, it sums to $6,890,682. He has earned the most from Safeway Open, having it won once.

Who is Cameron Champ Married To? Know About His Wife and Relationship Status

Champ is a married man living a happy married life along with his wife. Cameron walked down his wedding aisle along with Jessica Champ on December 3, 2020. The golf player opened up about his wedding through a post on his Instagram timeline. Following his timeline, we can be sure that The duo started dating in late 2018 and have been together ever since. He keeps sharing a lot of his photos with his wife. They are yet to welcome a new member to the family.

Cameron started playing golf in his High School days. After graduating from High School, Champ enrolled at the University of Texas A&M Aggies, where he was part of the golf team, won the OFCC/Fighting Illini Invitational, and finished in the top 10 of six other tournaments. Champ turned professional after graduating in 2017.

Champ started his professional career playing in the 2017 U.S Open along with Scottie Scheffler. Shortly after the event, he earned himself a place on the Web.com Tour for the start of 2018. Cameron won the 2018 Utah championship and earned his 2018/19 PGA Tour card. The American player won his first PGA title at the 2018 Sanderson Farms championship.