Cameron Tringale is an American professional golfer who plays in the PGA Tour. Turned professional in 2009, he earned the PGA Tour card the following year through qualifying finishing T 19. A graduate of Mission Viejo High School, Tringale finished his collegiate career at Georgia Tech where he was a three-time NCAA All-American.

Mission Viejo, California native, Cameron Tringale was born on 24th August 1987, under the star sign Virgo. He holds an American nationality and is of white ethnic background. The thirty-three years old stands 6 ft 2 in (1.88 m) and weighs 185 lb (84 kg; 13.2 st).

How Much Is Cameron Tringale's Net Worth In 2021? Career Earning and Prize money

To begin: Professional golfers are paid a percentage of the purse for each tournament they play in and finish in the money. Outside the court, the athlete earns much from his sponsorship and endorsements.

Currently, he is sponsored by Titleist, Georgia Tech, Pro Athlete Network, GREYSON, and Garden of Life.

A charity person, Tringale sponsors a child through Compassion International. Also, he made other donations to the charity from his golf winnings. As of 2021, his net worth is approximately $10 million.

Cameron Tringale is married to Tasha Tringale. His wife is a fitness model who works with Model JESUS and has had modeling partnerships.

In September 2018, Cameron popped a question while the two were in Jupiter Fla where the two went for a meal. Hearing YES!! he announced a similarly celebratory message on Instagram. The couple tied the knot on 1st December 2018 in Cabo San Lucas on the southern coast of Mexico’s Baja California. 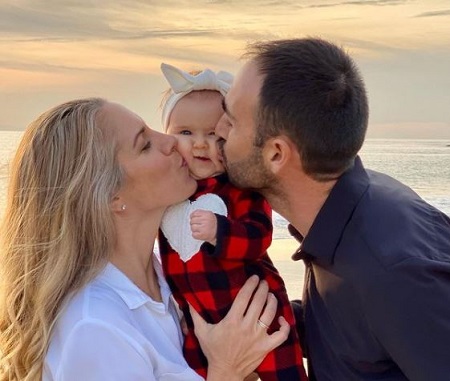 In January 2020, Tringale revealed that he and his wifey, Tash are expecting their first child via Instagram. In the post, the two were holding the photo of ultrasound photo. On 20th June 2020, they welcomed their baby girl, Gianna to the world. The family of three is living a blissful life.

Turned professional in 2009, Cameron Tringale received a 2010 PGA Tour card via qualifying school, where he finished T19. In January 2010, he made his PGA Tour debut at the 2010 Sony Open in Hawaii. Further, he gained his PGA Tour card for 2011 by securing 4th at Q-School in December 2010. He recorded 4th position at the Greenbrier Classic and CIMB Classic and a fifth at the Texas Open.