Jaylen Waddle is an American college football player who is a wide receiver and kick returner for the Alabama Crimson Tide. On 14th January 2021, he declared that he would forgo his senior season and enter the 2021 NFL Draft.

Houston, Texas native, Jaylen Waddle was born on 25th November 1998, under the star sign Sagittarius. He holds an American nationality and is of Afro-Ameican ethnic background. Regarding his physique, he stands 5 ft 10 in (1.78 m) and weighs 182 lb (83 kg).

Not to mention, college football is big business. Reportedly, the top division I NCAA football teams generate well over $100 million in revenue per season. Surprisingly, though, the players that make college sports possible aren’t paid a dime. However, athletes are often provided with full scholarships.

Since Waddle is yet to turn professional, he is yet to make out of his career. As of 2021, his net worth is under review.

Jaylen Waddle has successfully hidden his personal life from the media. There is no information if the college athlete is single or dating. Pretty famous on Instagram with 157k followers, Waddle's posts are only of basketball. There is no lovey dobby post on his IG which hints at his love life. 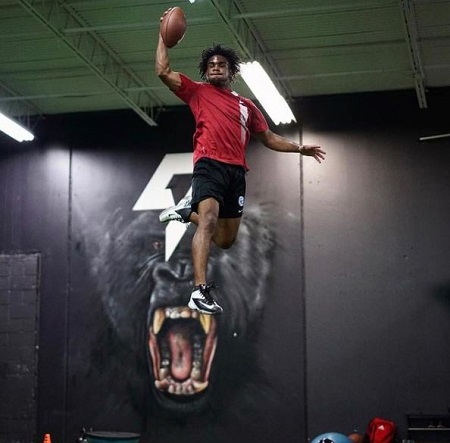 Besides, he is active on Twitter with 22.6k followers as of February 2021. Regarding his religion, he is Christian.

Jaylen Waddle enrolled at Episcopal High School in Bellaire, Texas. As a senior, he played in the U.S. Army All-American Game. As per his commitment, on National Signing Day of 2018, he chose the University of Alabama over Texas, Texas A&M, Florida State, TCU, and Oregon.

In 2018,  Waddle was named the SEC Freshman of the Year after recording 45 receptions for 848 yards and seven touchdowns as a freshman. Further, he returned 16 punts for 233 yards and a touchdown, as a punt returner.

The following season, waddle returned to the Crimson Tide for his sophomore season. He recorded 33 receptions for 560 yards and scored 6 receiving touchdowns. As a return specialist, he was named first-team All-SEC and was named SEC Special Teams Player of the Year.

On October 24, 2020, Waddle suffered a right ankle injury when he was tackled while returning the opening kickoff in a game against Tennessee. Waddle returned for the National Championship game against Ohio State.