Brian Elliott is a Canadian professional ice hockey goaltender. As of 2019, he plays for the Philadelphia Flyers of the National Hockey League (NHL). The Ottawa Senators picked him in the ninth round, 291st overall, of the 2003 NHL Entry Draft. Not only this, but he has also played in the NHL for the Colorado Avalanche, St. Louis Blues and Calgary Flames.

The thirty-four years old is married and shares a son with his wife. Regarding his financial aspects, the hunk has an estimated net worth of $10 million and reportedly earns $2 million per annum as salary from his native club.

How Much Is Brian Elliott Net Worth In 2019? Know His Salary and Contract

As of 2019, Brian Elliott has an estimated net worth of $10 million. Not to mention, the significant source of his income is his NHL career.

Besides, there is no information about his real estate properties and cars owned by him. Analyzing his socials, Elliott is living a lavish lifestyle.

Brian Elliot is married to his long-time girlfriend, Amanda Elliot. The couple met while studying at the University of Wisconsin, where Amanda was enrolled in the Reserve Officers Training Corps. After graduation, his lady soared as an Intelligence Officer in the U.S. Air Force. 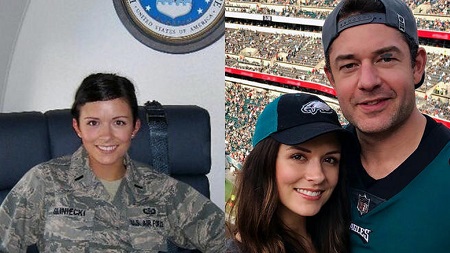 She finished her military service in June 2011. That same year the couple exchanged the vows in an intimate wedding ceremony.

Happy Mother’s Day to all the mums out there....but especially my two favorite!

On October 2, 2017, the couple welcomed their first child, a son named Owen.

A native of Newmarket, Ontario, Canada, Brian Elliott was born on April 9, 1985. His star sign is. Regarding his nationality, he is Canadian.

His father, Bill, is a television director who has worked on numerous Canadian television programs, including The Red Green Show. Elliott has one brother named Dan.

Growing up in Newmarket, Ontario, he played minor hockey for the Newmarket Redmen AA and the York-Simcoe Express AAA teams in the Ontario Minor Hockey Association.

In the 2003 NHL Entry Draft, Elliott was drafted in the ninth round, 291st overall by the Ottawa Senators. After being drafted, he spent four seasons with the University of Wisconsin–Madison, playing as a backup for his first two seasons before securing the starting goaltender position in the 2005–06 season.

On October 10, 2007, he made his NHL debut and earned the win against the Atlanta Thrashers. Upon Emery's return, Elliott went back to Binghamton, where he played in 44 games that season.

On February 18, 2011, Elliott was traded as a part of Ottawa's rebuilding process to the Colorado Avalanche n exchange for goaltender Craig Anderson before the trade deadline of the 2010–11 season.

On July 1, 2011, he agreed on a one-year contract worth $600,000 with the St. Louis Blues. There he revitalized his career, posting a 23–10–4 record while sporting a 1.56 GAA, Forming a formidable goaltending tandem with Jaroslav Halák.

The following year, he inked a two-year contract extension with the Blues. Moreover, his other extension contract was three-year $2.5 million, which he signed on May 19, 2014.

What's more, he was traded to Calgary Flames during the 2016 NHL Draft.

On July 1, 2017, Elliott agreed on a two-year, $5.5 million contract with the Philadelphia Flyers. Despite missing a few months due to injury, the Flyers qualified for the 2018 Stanley Cup playoffs. On June 26, 2019, Elliott re-signed with the Philadelphia Flyers, signing a one-year contract worth $2 million. His famous teammates include Claude Giroux, Robert Hagg, and Jakub Voracek.