Brian Davis Net Worth and Salary

A good friend with Christian Laettner, they partnered on $2 million donations to Duke’s men basketball programs. 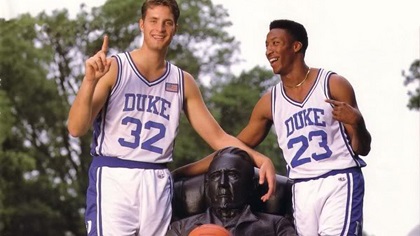 The two also pursued numerous business ventures together, including real estate development in Durham, a Major League Soccer team, as well as an unfortunate attempt to purchase the Memphis Grizzlies due to some legal problems.

He impressed his fans by his remarkable performance in the basketball game, he was too good in his game, he has a perfect personality, he has an impressive height of 6 feet and 7 inches and his body weight is 91 kg.

Brian Davis was born in the year 1970, on June 21, Atlantic City, New Jersey, the United States. His star sign is Cancer. As per nationality, he is an American and belongs to Afro-American ethnicity.

Since his childhood, he was passionate about basketball and football game.

He was the personality who dedicated, devoted and committed towards his game.

After completing his high school, he enrolled at the Duke University. The university provided him a perfect platform to lift his career; it gives him a new shape to his basketball career. He played four years of basketball at the University, appearing in 141 games and also was a significant member of the back-to-back national championship teams of 1991 and 1992.

Upon graduation, Davis played in the French league with Élan Béarnais Pau-Orthez during the 1992–93 season alongside seven-foot-seven Gheorghe Muresan. Then, he played the following season,  with the Minnesota Timberwolves, where he played alongside Duke teammate Christian Laettner.

Likewise, he played 1994-95 season with Pittsburgh Piranhas and Aliaga Petkim in 2000.