He started professionally participating in MMA in January 2013 and so far has appeared in 12 events with total 7 wins and 5 losses. Currently a Welterweight fighter, Camozzi signed a contract with the UFC on December 9, 2016.

Brian Camozziwas born on June 24, 1991, in Alameda, California, United States. Growing up in Parker, Colorado, United, he was interested in martial arts from a young age and practiced Wrestling, Kickboxing, and BJJ.

Brain in his personal UFC profile said how he started MMA As:

"My older brother Chris actually introduced me to MMA. I played lots of different sports growing up, from football to wrestling and rugby, and admittedly wasn’t ever really very good at any of them. Chris had been training and told me I should join the gym with him. I tried it and fell in love. He paid for my training in the beginning and after I graduated high school I devoted myself to training full-time."

In regards to his education, he is some high school graduated. He holds American nationality and his ethnicity is white. 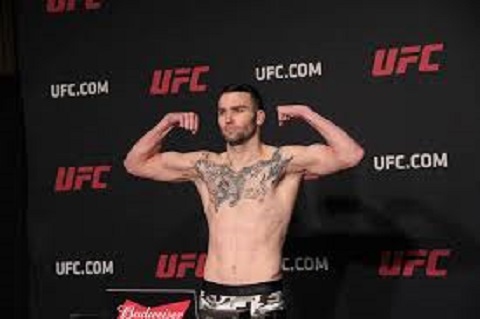 In addition to that, on 9-Sep-16, he fought against Nick Barnes at RFA 43 and won the match via Technical Submission (guillotine choke) in round 1. Henceforth, he at UFC Fight Night: Lewis vs. Abdurakhimov fought against Randy Brown, lost the match held on 9-Dec-16 via TKO (knee and punches) in round 2.

Tonight I got engaged to my best friend! We have been together for 9 years and she has been by my side through the best times and the worst times. I can't wait to spend my life with you @brittanyboone_mma

Though he is very shy about his personal life, he has spoken about his girlfriend in many interviews. Moreover, he has not yet disclosed any information about his past affairs and relationship.  He is 6' 2" ( 187 cm ) tall and weighs 170 lb ( 77 kg ). The MMA fighter has 78" reach.

Net Worth and Salary of Brian Camozzi

Talking about Brian Camozzi salary, he is estimated to have earned around $38,500 from his last fight against Geoffrey Neal on February 18, 2018. As all MMA fighters are supported by many endorsements like Reebok and Budlight he also enjoys some merchandise sales and endorsement money.

As per many tabloids, his current net worth is reportedly around $1 million and so far his main source of income remains his career as a fighter. He is a resident of Parker, Colorado, United and has a lovely home there. Moreover, he keeps his fans informed about his personal life from numerous social media.

Fun night at the fights last night! It's not often that @brittanyboone_mma and I get to be at a live event together just to watch!

Further, the MMA fighter is a pretty fund of expensive cars and is seen driving around in some exotic brands. He is a fitness freak and possesses a home gym where he spends his time building up for fights.

6 feet and 2 inches tall American mixed martial artist Brain Camozzi weighs 170lb which is also considered to be 77 kgs. Further, he is best known for his striking technique which makes him able to win the matches. However, his grappling technique doesn't seem that much qualitative.