Brandon Kyle Belt, aka Sparky, is an American professional baseball player who plays the first baseman. Currently, he is a free agent, but previously, he played for the San Francisco Giants in Major League Baseball (MLB). The 6 feet 3 inches tall player has also played left and right fields for the Giants.

Further, Belt played high school baseball at Hudson High School in Hudson, Texas. After that, he began playing college baseball at San Jacinto College. And his professional MLB career started when the San Francisco Giants selected him in the 2009 Major League Baseball draft.

Who Is Brandon Belt Wife? Details On His Married Life

Brandon Belt is happily married to his wife, Haylee Stephenson. They are high school sweethearts, as the couple met each other in high school. They dated each other for a long time and later thought of getting married. However, the duo is highly aware of their privacy. Due to their lowkey nature, we cannot give much information regarding their love life.

Besides, Belt and Stephenson tied the knot on December 3, 2010, in Lufkin, Texas, in the presence of their family and relatives. So, the pair have been married for over a decade, and their married life is still going well. The baseball player has also posted some moments with his partner on his IG account, where he is verified as @brandonbelt.

Moreover, Belt and Stephenson are the proud parents of two children named Greyson Elis Belt and August Belt. Their first child, Greyson, was born on August 14, 2014, while the second, August, was born on July 9, 2018. Being a professional baseball player, Belt has also worked with some brands that have helped him receive some cash. His Instagram posts show that he has also collaborated with CytoSport. Furthermore, Belt lives a lavish life like another baseball player Wirfin Obispo.

Belt went to Hudson High School in Hudson, Texas. There he played as a pitcher and outfielder. In the 2006 Major League Baseball draft, he was selected by Boston Red Sox. However, he didn't play with them. After that, his career began when he enrolled at San Jacinto College.

Belt also played for San Jacinto's baseball team in 2007. Again in the 2007 Major League Baseball draft, Belt was selected by the Atlanta Braves. This time, he again chose not to sign a deal. Later, he transferred to the University of Texas, where Belt played college baseball for the Texas Longhorns for two years. As a junior, he batted .323 in 63 games with eight home runs, 43 runs batted in, and 15 stolen bases recording a .989 fielding percentage.

The San Franciso Giants selected belt in the 2009 Major League Baseball draft in the 5th round with the 147th overall pick. After that, Belt began his professional career with the High-A Giants affiliate in San Jose. His career went well, and in 2010, he also played for the San Francisco Giants Class-AAA-affiliate Fresno Grizzlies.

After finishing his minor leagues best, Belt was invited to spring training in 2011. During that time, he played in 28 exhibition games. And his first major league game came in March 2011 against Los Angeles Dodgers. Likewise, Belt made the Giants' opening-day roster for 2012. In the 2012 NLCS, he hit .304 in six games with a .565 slugging percentage.

In the same way, Belt played with the same team for his entire career (12 seasons). When catcher Buster Posey retired, Belt became the longest-tenured member of the Giants. Throughout his career, he has faced some injuries.

Details On Brandon Belt Injury: Has He Retired?

Belt underwent knee surgery in early September 2022. In the same month, he was transferred from the 10-day injured list to the 60-day IL. Throughout the years, he has faced chronic knee issues. Also, Belt may have some problems with his knee, which has left fans wondering if he retired from professional baseball.

However, Belt has not given any updates regarding his retirement. He was elected free agency on November 6, 2022.

Brandon Belt was born on April 20, 1988, in Nacogdoches, Texas, US. Belt was raised by his supportive parents, Darrell Belt (father) and Janice Belt (mother). It is reported that Belt also has a younger brother named Cameron. 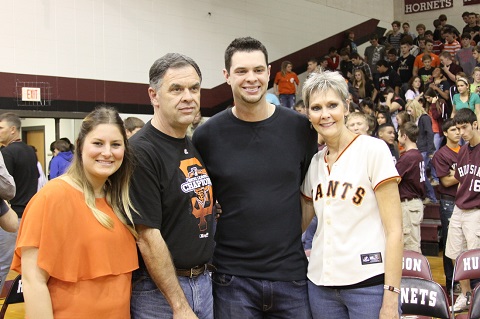 Belt has received massive support from his parents as they have also appeared in some of his games to cheer him. We can find some of their images on the internet. Regarding his physical appearance, Belt has an impressive height of 6 feet 3 inches and weighs 231 pounds (105 kg).