Bailey Zappe is a rising American football player. He is currently playing in the Eastern Division and Conference USA for Western Kentucky University. Zappe plays as a quarterback for his team. He was named the Southland Co-Offensive Player of the Year in 2020 and C-USA Most Valuable Player in 2021.

Bailey Zappe was born Bailey Michael Zappe on April 26, 1999, in Victoria, Texas. He is among the two children born to Michael Zappe and his wife, Samie Zappe. Bailey has a brother named Trent. Zappe is currently pursuing his undergraduate in sports medicine. After graduating from Victora East High School, He enrolled at Houston Baptist University. Bailey stands six feet and two inches tall and weighs 98 kg. Bailey tries to pass the ball towards his teammate SOURCE: Plam Beach Post

Bailey chose to play with Houston Baptist University as it was the only scholarship offer. In his freshman year, The player started in nine-game while appearing in ten games for the team. He finished the season passing for 1,548 yards with five touchdowns and 10 interceptions while rushing for two more touchdowns. Zappe was named the Southland Conference Commissioner’s Academic Honor Roll in sophomore year.  In junior year completing 357-of-560 passes for 3,811 yards with 35 touchdowns and 15 interceptions.

The American football player transferred to Western Kentucky University for his senior year and has an exceptional season with the team. He is set to list his name for the 2022 NFL draft.

Bailey is very much open about his relationship status. He is an active social media user and keeps posting numerous photos of his games and girlfriend in his timeline. Zappe is involved in a romantic relationship with his longtime girlfriend, Hannah Lewis. The love birds have been together for more than four years. 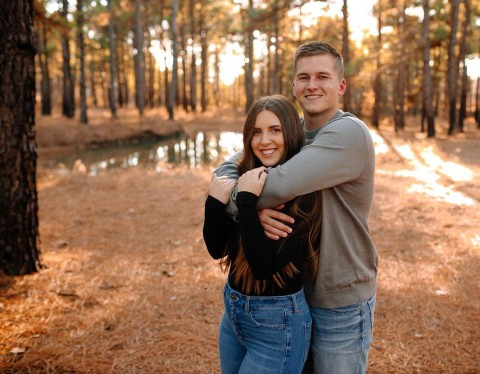 Bailey and Hannah met each other at the university. The love birds keep sharing numerous photos of each other in their timeline. The duo is yet to get engaged or tie their wedding knot.

Bailey Zappe is yet to start his professional career, and the college players do not make a penny while representing their universities in the respective sports. He is set to earn a huge amount to his net worth in the upcoming days. Many top clubs are keeping a close eye on him. If drafted in the first round, the player's salary will cross more than $10 Million.