Breece Hall is a rising American college football player. He is currently playing in the Big 12 Conference for Iowa State University. Breece plays as a running back for his team. Hall was named in the First-team All-Big team for two years in a row.

Breece Hall was born on May 31, 2001, in Omaha, Nebraska. He is the son of Larhonda McDaniel and her former husband. His stepfather, Jeff Smith, played football at Nebraska and was a running back for the Kansas City Chiefs and Tampa Bay Buccaneers. Breece graduated from Wichita Northwest High School and enrolled at Iowa State University. Hall stands six feet and one inch tall and weighs 100 kg. 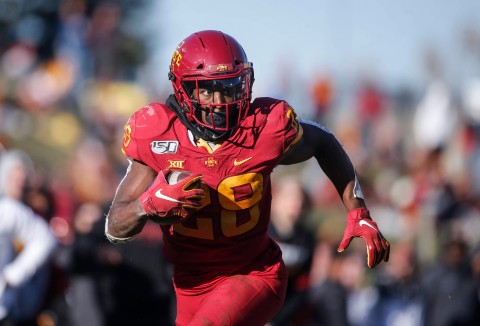 After graduating from High School, Breece got multiple offers from universities but chose to play for Iowa State University. Hall became the number one starting running back for Iowa State after the departure of David Montgomery. Breece was named the co-Newcomer of the Week twice at the season's starting. The player finished the season with 897 rushing yards and 9 touchdowns while catching 23 passes for 252 yards and one touchdown and was named second-team All-Big 12.

Hall repeated similar freshman year stats in his sophomore year and was named Consensus All-American, First-team All-Big 12 and Offensive Player of the Year. He finished the season as the FBS leader in rushing yards with 1,572 on 279 carries and 21 rushing touchdowns while catching 23 passes for 180 yards and two touchdowns. Many top franchises are keeping a close eye on him. The player has listed his name for the 2022 NFL draft. He will be among the top-rated running back in the draft.

Breece is very much private about his personal life. He has not uttered a single word about having a girlfriend and is not dating anyone in public. Hall is believed to be single as of late 2021. The American football player is very early in his career and could focus on making a good career and starting a healthy relationship.

Salary, Net Worth and Contracts

Breece Hall is yet to start his professional career. NCAA rules abide the universities in paying their athletes with salaries. However, The universities help the students with scholarships that will cover most of their expenses. Hall will be making millions in the future. The average salary of a first-round pick in the NFL is more than $10 Million.