Austin Blythe is an American football player who is signed to the Kansas City Chiefs of the National Football League (NFL). The center finished his collegiate career playing for th Iowa, earning a spot in the Big Ten Championship and the 2016 Rose Bowl. He was picked by the Indianapolis Colts in the 7th round of the 2016 NFL Draft where he played a season and then moved to Los Angeles Rams until 2020.

Williamsburg, Iowa native, Austin Blythe was born on 16th June 1992, under the star sign Gemini. Further, he stands 6 ft 3 in (1.91 m) and weighs 298 lb (135 kg). His parents are Curt Blythe and Mary Blythe. He did high schooling in his hometown where he earned 2X all-state football player at the center as well as 3X state champion in wrestling.

How Much Is Austin Blythe's Net Worth In 2021? Salary & Contract

Kansas City Chiefs' center, Blythe is married to Kylie Ritchie, Austin's high school football coach at Williamsburg and now a teacher. They tied the knot on 16th May 2015, in a secret ceremony. The two had known each other since elementary school  (grade three) but did not begin dating until their freshman year of college. There are no records of their past affairs. 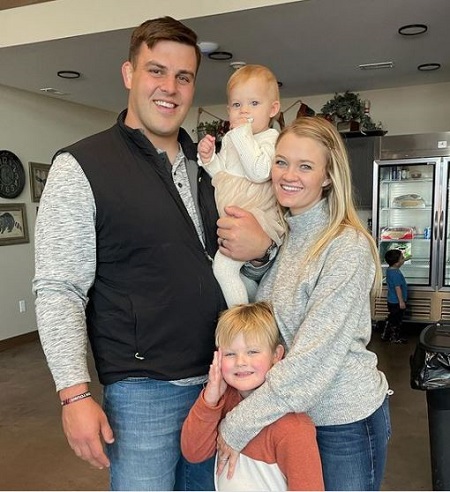 In June 2016, the couple had their first child, a son. In January 2020, The Blythes welcomed their daughter. The family of four is living a blissful life.

In 2016, Austin Blythe was picked in the seventh round (248th overall) in the draft by the Indianapolis Colts. In his rookie season, he was center behind fellow rookie Ryan Kelly. He appeared in eight games with one start. On 15th May 2017, Blythe was waived by the team.

On 16th May 2017, the Los Angeles Rams claimed the waivers. That season, he played in all 16 games, earning his first start of the season in Week 17 at left guard. He started the 2018 season, as the starting right guard after incumbent starter Jamon Brown was suspended the first two matches of the season. Upon Brown's arrival, he still secured his starting role. On March 26, 2020, Blythe agreed on an extension deal with the Rams.