Arturs Martins Zagars a.k.a. Arturs Zagars is a Latvian basketball player who plays side the Liga ACB. Also, he played on loan to Prat of the LEB Oro. Declared for the 2020 NBA Draft, he projects to be a borderline second-round prospect.

A professional since 2017, Zagars plays for the Spanish top league, ACB side Joventut Badalona where the basketball player's average starting salaries typically range from $65,000 to $100,000. In some instances, the earnings are untaxed, and also provide apartments and vehicles to players.

Zagar's other income-generating sources are considered salary from the national team as well as endorsement deals. 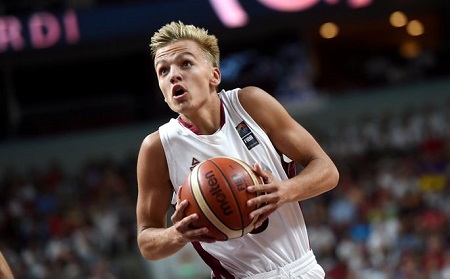 Other than that, Zagars is the second round prospect pick of the 2020 NBA Draft. Following the recent success of Rodions Kurucs, Davis Bertans, and Kristaps Porzingis, it’s clear scouts have ramped up efforts in that corner of Europe. Zagars projects to be the first point guard prospect from Latvia to find a sucess in the NBA.

Many ladies has a crush on this Latvian basketball player, Arturs Zagars. But he is the one who is focused on his basketball career rather than involving in romantic affairs. To date, there is no news, and rumors popped out on the media side regarding his love life.

As of now, the hunk is believed to be single. Further, he is active on Instagram with 8,428 followers. His posts on the page are mostly from his career and some from vacations.

Following various youth system at Latvian club BS DSN Riga, Zagar joined Joventut Badalona in 2017. The following year on 11th March, he made his Liga ACB debut, scoring two points in seven minutes versus Baskonia. later eight months, he suffered a torn ligament in his ankle and was sidelined until early March 2019 after undergoing surgery.

At the international level, he was named to the All-Star Five of the 2018 FIBA Europe Under-18 Championship in Riga. In the match, he averaged 18.9 points,6.3 assists, and 1.9 steals per game, while leading the Latvian national under-18 team to its first finals appearance and silver medal at the tournament.