Aron Einar Malmquist Gunnarsson, commonly known as Aron Gunnarsson is an Icelandic international footballer who plays Iceland national team and for Premier League side Cardiff City. The footballer can play either as a central midfielder or a defensive midfielder.

The captain of the Iceland National Team playing in the World Cup 2018, Gunnarsson is a married man and shares two children with his spouse. Furthermore, his net worth is 2019 is approximately €2 million.

Aron Gunnarsson's Net Worth and Endorsement

As of now, his net worth is estimated to be around €2 million. 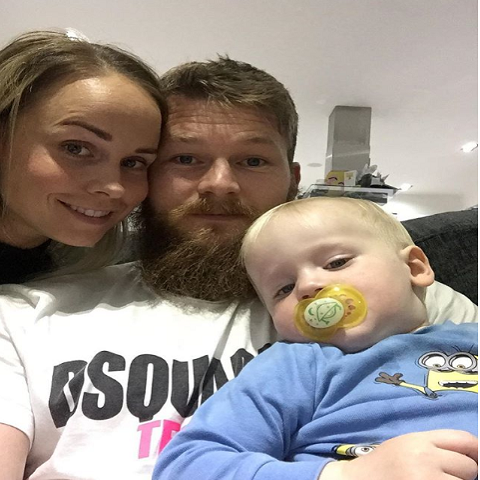 Not only a mother and girlfriend, but Jonasdottis is also a businesswoman: she is the owner of Brasilian Tan, a tanning lotion used by professional bodybuilders, fitness competitors, athletes, models, and dancer.

Also, she has won the UK Body Buildings and Fitness Welsh Championships. She is a sponsored athlete with Nike and QNT supplements.

A year ago was one of the best day of my life when I got married to my best friend and soul mate Feel like the luckiest girl in the world with you by my side, you make everything betterHappy anniversary my love @arongunnarsson @ozzophotography #1yearanniversary #married #myman #my #pappírsbrúðkaup

On 17th June 2017, the couple tied the knot in a grand ceremony which was attended by their family and close friends.

In September 2018, the duo welcomed their second baby.

Aron Gunnarsson was born on 22nd April 1989 in Akureyri, Iceland. His star sign is Taurus. By nationality, he is an Icelandic.

Gunnarsson grew up alongside his brother, Arnor Thor Gunnarsson, who is now a professional handball player for the Icelandic national team and Bergischer HC. He commenced his football Career at Þor Akureyri, at the age of eight.

The following season, he switched to AZ. He only played a game and remained two seasons on the bench.

On 17th June 2008, Gunnarsson peened a three-year contract for English Championship side Coventry City. He made his debut for the club in a 2-0 victory over Norwich City, on the opening day of the Championship season.

He played 133 matches and 7 goals in three seasons for the club.

On 8th July 2011, Gunnarsson signed a three-year contract with Cardiff City on a free transfer. On 7th August, he made his debut in the opening game of the new season in the 1-0 away victory against West Ham United.

Furthermore, Gunnarsson was a runner-up in the 2012 Football League Cup Final and also represented Cardiff City in the 2013–14 Premier League.

Gunnarsson plays for Iceland national team at international level, having made his senior debut on 2nd February 2008. The young talent has been Iceland's captain since mid-2012, captaining the team to the quarter-finals at their first major tournament, UEFA Euro 2016.

Till the date, he has capped 70 times.

In May 2018, he was selected in Iceland’s 23 man squad for the 2018 FIFA World Cup along with his teammates Runar Alex Runarsson, Birkir Mar Saevarsson, and Albert Gudmundsson.