Ridgefield, Connecticut native, Anthony Alfredo was born on 31st March 1999, under the star sign Capricorn. The twenty-two years old holds an American nationality and is of white ethnic background. He is the son of Rob and Veronica.

How Much Is Antony Alfredo's Net Worth In 2021?

However, racing is not only an income source. Endorsements and sponsorships play a vital role. To count there are only a handful of Alfredo sponsors but still, it pays good sums.

Is Anthony Alfredo In A Relationship? Know His Personal Life

Anthony has flaunted every bit of his love life to his fan. Worlds know that the hunk is in a relationship. Earlier, he used to share the only photos with his girl with no tag to her. 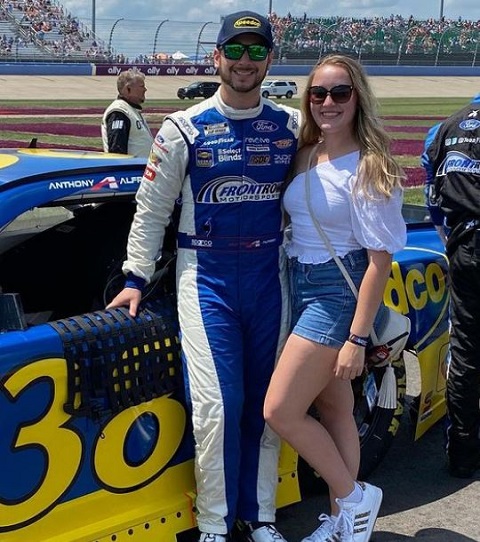 Recently, he revealed what he calls her, "Emily". On her birthday he gave an IG shoutout, "Happy Birthday Emily! Thank you for everything you do for me and always being by my side. I can’t wait to spend today with you."

Besides, the car racing driver is an avid video game player. He has set up his own Twitch channel for others to view his gaming.

Alfredo began his racing career after being inspired by watching racing on television. Made his debut in go-Kart racing. Later, he signed a deal with noted short track racer Lee Faulk to run limited late model races. With the team, he won the 2016 Southeast Limited Late Model Series Pro Division championship. He continued to race late models stocks in 2018, teaming up with Peyton Sellers.

To run the entirety of the 2018 NASCAR K&N Pro Series East schedule, he agreed on a deal with  MDM Motorsports. In March, he bagged the first trophy at South Boston Speedway. From there, he entered two ARCA Racing Series events in 2018. In 2019, Alfredo joined the Truck Series in the No. 17 truck for DGR-Crosley.

In 2020, he drove the No. 21 for the team in the NASCAR Xfinity Series. On January 6, 2021, it was announced that Alfredo would drive the No. 38 car full-time in the NASCAR Cup Series by Front Row Motorsports where he replaces the previous driver John Hunter Nemechek.