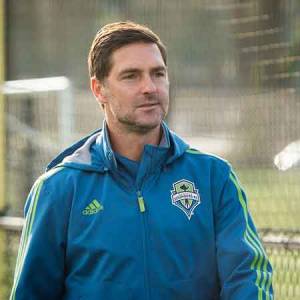 Ante Razov is a former American soccer player who used to play the position of forwarder during his professional years. He is one of the leading goal scorers in the history of Major League Soccer and also the all-time leading goal scorer for the Chicago Fire with 76 goals and Chivas USA with 30 goals.

He is the third player in the history of MLS to score 100 goals. He is currently an assistant coach at Los Angeles FC.

Ante Razov was born on March 2, 1974, in Whittier, California. His parents' Mile Razov and Angela Razov were Croatian immigrants. He graduated from Fontana High School and attended UCLA where he started to play college soccer.

Ante Razov's name was entered in the 1996 MLS College Draft where he was picked in the third round by Los Angeles Galaxy. He stayed for two seasons with the Galaxy but saw very little of playing time and was only able to score one goal during his time at the team. He signed with the Chicago Fire in the 1998 season.

Razov spent seven years with the Chicago during except for the brief period of 2001 where he was sent to Spanish second division club Racing de Ferrol. He won the 1998 MLS Cup and 1998, 2000 and 2003 US Open Cup with Chicago Fire. He became the club's all-time goal scorer with 76 goals and 190 points. He was named MLS Best X in 2003.

Ante Razov and head coach Dave Sarachan could not get along following a disappointing performance of 2004 season which resulted in him being traded to Columbus Crew in exchange for Tony Sanneh. He wound up clashing with the head coach Greg Andrulis of the Columbus which resulted in his tenure with the club ending after five games. He was traded to MetroStars in exchange for John Wolyniec.

From 2006 to 2009, he played with the Chivas USA. At 33 years old, Razov became the third player in MLS history to reach 100 goals trailing behind Jaime Moreno and Jeff Cunningham. He is also the leading goal scorer for Chivas USA with 30 goals.

Ante Razov has shifted to coaching after the end of his professional career. He was previously hired to replace Craig Harrington as the LA Galaxy's U14 head coach. He was announced to join the coaching staff as an assistant coach under his former coach Bob Bradley in January 2018. He currently serves as an assistant coach along with Mike Sorber and Keeny Arena.

Ante Razov's personal life has for the most case scenario remained a mystery. There are no details of his love affairs past or present. There is no news of him being married to date as such he does not have a wife or a child. But, whether he is dating anyone at the moment remains unknown.

Net Worth of Ante Razov

Ante Razov's net worth at present is under review. His salary for the year 2009 during his time at Chivas USA is reported to be $258,750. However, his current salary with the LA Galaxy has not been disclosed and there is very little information when it comes to his personal assets which have made it difficult to estimate his net worth.