One of the easiest ways to rise to fame is through relationship status with a reputed one. Anna Kupp is among those lucky ones. Anna is the wife of famous American football wide receiver for the Los Angeles Rams of the National Football league, Cooper Douglas Kupp.

Anna Kupp was born Anna Marie Croskrey on Mach 22, 1994, in Kennewick, Washington. She is among the six children born to Veronica Croskrey and her husband, Nathan Croskrey. Anna graduated from Richland High School in 2012 and enrolled at Eastern Washington University, where she acquired a degree in communications with an emphasis on public relations.

Anna and Cooper walked down their wedding aisle on June 20, 2015. The love birds had been dating each other for more than two years before tying their wedding knot. The duo first met each other at the University. Cooper was part of the university's Men's football team, and Anna was a track and field athlete. They became friends initially, and it did not take time for the friendship to turn into a relationship and then to the wedding. 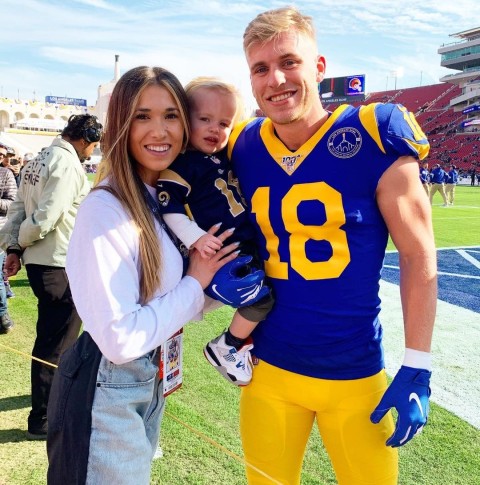 CAPTION: Anna along with her husband and their son at Cooper's game SOURCE: [email protected]

In early 2018, Anna and Cooper opened about execting a baby shortly. On July 2, 2018, The love birds were blessed with their first child, Cooper Jameson Kupp. In March 2021, The family of three extended to four after the birth of their daughter. They have not shared a word about their daughter in the media. The family of five is living a happy and blissful married life. It's been more than six years since their marriage, and there have been no rumors of the couple having ups and downs in their married lives.

Cooper remains out of the house most of his time for his games and training; Anna remains with their children looking after them. Both of them keep sharing each other's photos regularly.

Kupp will receive $20 Million as his guaranteed signing bonus and a total of $35 Million as garmented money. He is very much early in his career and shall be adding much more in the days to come.

Anna did not continue her career after graduating from the University. However, Cooper was part of the Universities Men's football team and enlisted his name for the 2017 NFL Draft. Los Angeles Rams drafted him in the third round overall 69th pick. Kupp was named into the 2017 All-Rookie Team. He finished the 2017 season playing in fifteen games.

Coming into the 2018 season, Cooper played in just eight games after suffering from an injury. In 2020, Kupp extended his contract with the Rams for three years worth $48 Million.