Gossip Angela Stanford Net worth 2018? Her Earnings from Golf, Endorsement Deals and her Properties

Angela Stanford Net worth 2018? Her Earnings from Golf, Endorsement Deals and her Properties

An American professional golfer Angela Stanford currently competes in the LPGA tour. A professional since 2000, she won her first major title at the Evian Championship in September 2018.

Angela Stanford is one of the highest earning female golfers. She is estimated to have the net worth of $7 million in 2018. The major source of her earnings is her 18 years professional golf career from which she has made the career earnings of $11,142,413 representing in 435 events. 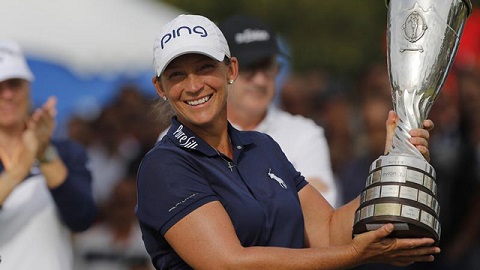 Stanford recently won the Evian Championship in September 2018. She was able to win $577,500- which is also the biggest payday in her 18-year LPGA career.

In 2017, she was able to win $367,119 from various event appearances and also crossed the $10 million career earnings mark. She was also the 9th highest LPGA money-winning female golfer with $1.1 million in 2008.

The American golfer, Stanford has not opened up about her properties owned by her. No details about her house, car and other wealth is available at current.

Angela doesn't have big endorsement deals like Lexi Thompson but she does make some of her money through endorsement. She recently tweeted a photo of a Puresilk Shave product and is believed to have a deal with the brand.

One of the best boxes of the year! Can’t wait to start the year w @PureSilkShave at @PureSilkLPGA
Thank you! pic.twitter.com/tFbsMwn47o

She had also signed a global endorsement contract with PureSport back in 2009.

PureSport is makers of the new, science-based and patent-pending performance drinks that have revolutionized the sports drink category.