Cristie Kerr is an American professional golfer currently competing in LPGA tour. She is a former no. 1 ranked female golfer on three occasions in 2010. She has 20 wins in LPGA Tour, including two major championships.

She has an estimated net worth of $12 million, and overall $19 million in career earnings. She married Erik Stevens in 2006, who is a successful business person.

She was born in the year 1977, on October 12, Miami, Florida, the United States is her birthplace. She was born to American parents, Linda Kerr and Michael Kerr.

She is an American by her nationality, and her ethnicity is white. Her star sign is Libra. Since 1996, she is one of the proficient names in the golf. She graduated from Miami Sunset High School in West Kendall, Florida.

Cristie Kerr's Net Worth and Endorsements

The 41 years aged former world's number 1, Kristie Kerr had an estimated net worth of $12 million in  2018, including all of her properties and earnings($11 million more compared to the fellow golfer, Paige Spiranac). Maximum of her net worth is build through her prize money and trophies.

She has 20 wins on the LPGA Tour, including two major championships, and over $19 million in career earnings. As being a golfer she doesn't have a fixed salary or wage.

She impressed and collected a huge amount of fans for her dedication and devotion to the game, she is of a pleasant personality, and she is decent and honest too. She has an average height of 5 feet and 3 inches. Her body weight is 138 lbs, her fans love her and always gets connected with her on Twitter, Facebook and wiki.

She is the woman who committed, keen, and professional towards her carer.  She was passionate about playing golf; at the age of eight, she enrolled herself in the golf world. She is naturally left-handed but plays golf right-handed.

She had also a successful amateur career; she bags the 1994 Junior Orange Bowl Intl. Golf Championship, in the year 1996, she also delivered her skills in the Curtis Cup.

Moving to her professional career, in the year 1996, she entered into the professional world of golf. However, she is a champion now, but her LPGA career started slowly. In the year 2002, she manages to win her first LPGA event at the Longs Drugs Challenge in California.

By 2004, she was one of the foremost players on the tour; she also bags two tournaments in 2005, in the year 2015, she won the CME Group Tour Championship. 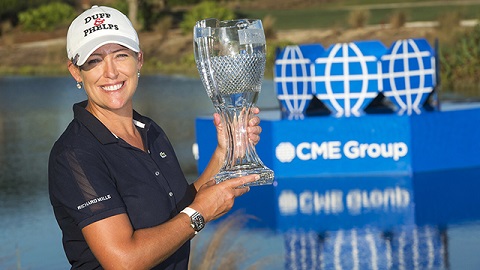 Kerr made an appearance on an episode of the third season of Donald Trump's television series The Apprentice in 2005. She tied her knot with her loving boyfriend, Erik Stevens, in 2006. Her husband is a professional business person from America. The couple is living happily together, they are often found together in the parties and public. On December 8, 2013, Kerr and Stevens welcomed their first child, a son named Mason, via a surrogate. Their second baby son was born in the year August 2018.

She is a loyal and dedicated wife and there is no issue of divorce between the lovely couples. The lovely couple has blissful children; they welcomed their first child, a son named Mason, via a surrogate.

She is the woman who dedicated himself to the humanitarian work. She is socially active in fundraising for breast cancer research.  She is a good friend of Lexi Thompson and Brooke Henderson.