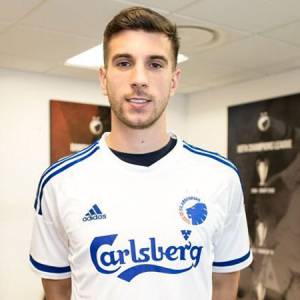 Andrija Pavlovic is a Serbian footballer who currently plays as a striker for National Team of Serbia and professional Danish football club, F.C. Copenhagen. The 24-year-old also had a spell with Rad, Palic, BASK, and Cukaricki previously.

More than Sports GmbH is the agent of Pavlovic. He was the member of the Cukaricki team that was honored with Serbian Cup in 2014-015.

Andrija Pavlovic was born on November 16, 1993, in Belgrade, FR Yugoslavia. Regarding his nationality, he is Serbian.

Pavlovic current market value is estimated at £1.58million. As of 2018, Pavlovic’s annual salary is estimated to be 1.50 million Euros.

Andrija Pavlovic began his professional footballing career as a member of the Policajac. Later, he joined the youth team of Rad.

In 2011, he was promoted to a senior team and made his senior debut in the last fixture of 2010-11 Serbian SuperLiga. For the club, he scored 1 goal in 17 appearances.

Pavlovic scored his first goal in a match against Radnicki Kragujevac in September 2013. On August 1, 2011, he was loaned to FK Palic Koming where he played 21 games and scored 5 goals before ending his loan-contract.

Pavlovic had loan spells at Bask Belgrad on July 1, 2012, where he managed 9 appearances scoring 6 goals.

He was signed by Cukaricki on January 31, 2014, on a free transfer from Rad. In his first SuperLiga season, he made 24 appearances.

Pavlovic was nominated for player of the month after scoring 10 goals in 5 matches. He scored 19 goals in 61 appearances before ending his contract with the team.

On July 1, 2016, Pavlovic signed a five-year contract with FC Copenhagen with the transfer fee of £1.80 million. He has so far scored 15 goals in 52 appearances. He is the member of the team that won Danish Superliga and Danish Cup in 2016-017.

In 2012, Pavlovic made his international debut with the Serbia U-20 team. He was then invited by Serbian National U-21 football team.

On May 25, 2016, Pavlovic made his international debut with the Serbia national team in a win against Cyprus, friendly match. He has been capped 5 times for his national team since then.

He is supported by Aleksandar Mitrovic, Aleksandar Prijovic, and Dorde Ivanovic in the international games.

Andrija Pavlovic doesn’t like to talk about his private life, and he carefully avoids media as much as possible. So far, Pavlovic is not reported to have indulged in serious relationships.

Moreover, it is believed that Pavlovic doesn’t have any girlfriend at the moment.

Pavlovic stands at the height of 6 feet and two inches and weighs 85 kg.