Andrei Mostovoy is a rising Russin professional football player. He is currently playing in the Russian Premier League for the Zenit Sanit Petersburg FC. Mostovoy has been playing in professional matches since 2016. Andrei plays as a Winger for his club and country.

Andrei Mostovoy was born Andrei Andreyevixh Mostovoy on November 5, 1997, in Omsk, Russia. He did not come from a reputed family and has not shared about his early life and parents. Talking about his physical appearance,  Andrei stands five feet and eleven inches tall and weighs 77 kg.

Andrei Mostovoy has an estimated net worth of more than $2 Million. The player has earned most of his net worth through his short football career. Andrei turned professional in 2016 and is among the highest-earning player for his club. Mostovoy has an annual salary of £1,040,000 while playing with Zenit for the 2022 season. Dejan Lovren is the highest-paid player from his club with an annual wage of £5,564,000. Andrei is very much early in his career and will be adding millions. Mostovoy must be making a good sum of money from his sponsorship and advertising deals. The player will receive a minimum of £1.4 Million until 2024 as per his contract.

Who is Andrei Mostovoy Dating? Know About His Girlfriend and Relationship Status

Andrei is very much open about his relationship status. The Russian football player is believed to be single as of early 2022. The player is an active social media user who shares his photos. In his timeline, no picture could suggest him to be dating someone. Mostovoy spends most of his free time with his friends and family.

There is no rumor of him dating anyone in public. Andrei must be focusing on his career. In 2015, There were a few photos of him with a girl, but the photos have stopped in recent days. There is no information about the girl.

Andrei started training with the youth team of CSKA Moscow in 2002. The player represented the club's youth team in numerous divisions and won numerous titles. After spending almost a decade with the team, He joined Lokomotiv Moscow in 2012. However, Mostovory signed with FSK Dolgoprudny FC in early 2016 made his Russian Professional Football League debut in April agast FC Znamya Truda. 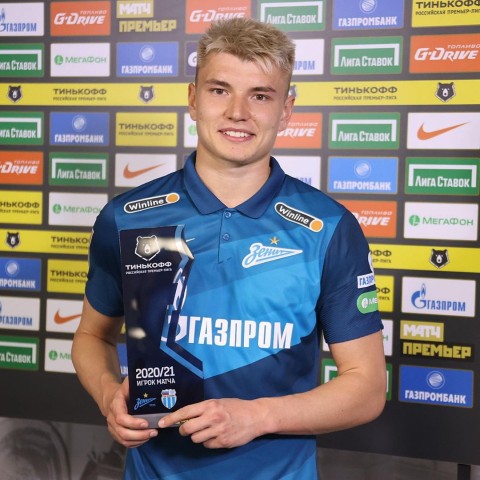 Andrei moved to Khimki FC in late 2016 and signed a four-year deal with the club. In 2019, He signed with Zenit Saint Petersburg for three seasons. He was loaned to Sochi for a season and made twenty-five appearances. In early 2021, The player extended his contract until the 2023/24 season. The team won the 2021/21 Russian Premier League.

Andrei has represented Russia in numerous international events. He earned his international caps in 2020 for Russia at the UEFA Nations League game. Mostovoy was named into the UEFA Euro 2020 team but was replaced due to COVID-19 positive testing.