Andreas Ulmer is an Austrian professional footballer who is signed to the Austrian Bundesliga side, Red Bull Salzburg as a captain as well as plays for the Austrian national team as a defender. Early in his career, he played for SV Reid and Austria Wien.

How Much Is Andreas Ulmer's Net Worth In 2021? Salary & Market Value

Andreas Ulmer is the highest-paid player in the Austrian Football Bundesliga with a weekly wage of £38,000 which is £1,976,000 per year.

Besides his salary from the club, Ulmer makes much money from endorsement and sponsorships. As of 2021, his net worth is $1 million.

Andreas Ulmer is married to Sarah Ulmer-Ganglmair. The couple tied the knot in July 2017. The footballer posts their wedding photo on his Instagram that reads, "After a great season, my personal highlight came, our wedding." Since he is regular with to socials sharing his personal stuff. 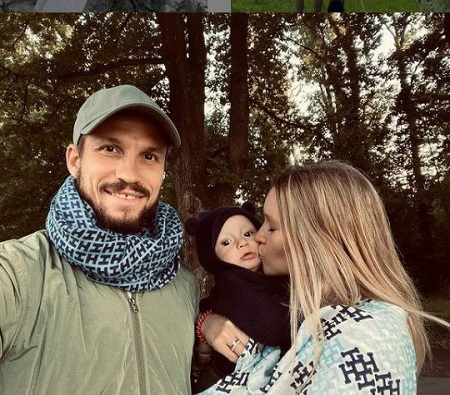 In August 2019, Andreas Ulmer and his wife welcomed their first baby boy. The family of four is living a blissful life.

Andreas Ulmer spent his youth career playing for SK Lenze Asten and LASK. In 2004, he joined Austria Wien to make his professional debut for Austria Wien in the 2004–2005 season.

On 28 January 2009, Ulmer was transferred to Red Bull Salzburg with immediate effect. He was a team member of Salzburg in the 2017-18 season who had their best ever European campaign, finishing top of their Europa League group, for a record fourth time.

On 3 May 2018, Ulmer appeared in the Europa League semi-finals as Olympique de Marseille played out a 1–2 away loss but a 3–2 aggregate victory to reserve a spot in the 2018 Europa League Final.

A full international since 2009, he has earned 26 caps from the Austrian national team. His national teammates include Valentino Lazaro and Xaver Schlager.