Stefan Lainer is an Austrian professional football player who mainly plays as a right-back for the Austria National Football team. As for his club career, he is currently signed to the Bundesliga club named Borussia Mönchengladbach.

Born in 1992, Stefan Lainer celebrates his birthday on the 27th of August every year. He is currently 28 years old. His zodiac sign is Virgo. Likewise, he hails from the suburbs of Seekirchen am Wallersee, Salzburg, Austria.

There is no information on if he has any siblings or not. As for his measurements, Stefan stands at an average height of 5 feet 9 inches (1.75 meters).

Stefan Lainer began playing football after being influenced by his father. Initially, he used to play for the youth team of SV Seekirchen. In 2006, he joined the youth academy of FC Red Bull Salzburg, where he trained and played for the youth team.

In 2011, he was sent on loan to SV Grödig till the end of the 2011-12 season. After his return to FC Red Bull Salzburg, he spent one year with the club's age-level team before being promoted to the club's second team, FC Liefering.

He spent one season with the team and appeared in 62 regular-season games and scored 3 goals. In 2014, he signed a deal with SV Ried for a season. After his contract with the team ended, he was once again signed by FC Red Bull Salzburg.

He had signed a three-year contract with the club for £140,000. In the three seasons that he played with the club, he made his appearance in 74 regular-season games and scored 8 goals. During his time with the club, he was able to lift four Austrian league titles and three Austrian cups.

After the end of the 2018-19 season, his contract expired and he was signed by Borussia Mönchengladbach. Since then, he has been playing with the same club and has impressed numerous fans through his amazing performances.

As of this writing, he has made a total of 84 appearances for Mönchengladbach and has scored 3 goals and made 11 assists.

Stefan was called up to the senior Austria national team in 2017, at the age of 24 years, 7 months, and 1 day. He made his debut on March 28, 2017, in a friendly game against Finland. Since then, he has been regularly included in the senior team squad, either in friendlies or some prestigious tournaments.

In the second game, Austria faced the Netherlands. The match ended in Austria losing by 2-0. Stefan once again played the whole 90 minutes but wasn't able to contribute much.

The 28-year-old Austrian footballer has had a flourishing career, which also has impacted his career earnings. It is reported that he earns a total salary of £86,000 per week or £4,472,000 per year during his time at Borussia Mönchengladbach. His contract with the club expires on June 30, 2024.

As per transfermarkt.com, it is known that his current market value is €12.50 million. He also earned a good sum from his former clubs. Moreover, he is getting well-paid as a national team player, as well as, from his sponsors. 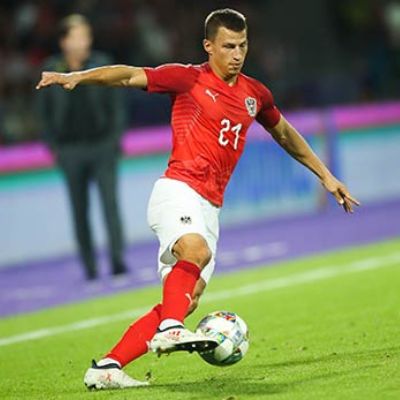 With such illustrious earnings, he must have invested in some long-term services, such as real-states or bought houses/properties, or have a collection of expensive vehicles. However, even if he has invested, those details are yet to be disclosed to the public.

At last, his net worth must be in the millions considering his sources of income. Well, it is reported that Stefan Lainer has a net worth of around $3 million - $5 million.

Is Stefan Married or Dating?

Stefan Lainer has managed to keep his romantic life details in the darkness and prefers to keep it that way. He is so much concerned about privacy that he is not available on any social media platforms.

However, it is assumed the footballer is currently in a relationship and even married. The assumption comes after Stefan's team-mate and close friend, Konrad Laimer shared a picture on May 29, 2019. In the picture, Konrad and his girlfriend, Ines-Sarah, were accompanied by Stefan and a girl named Ninam Lainer.

Moreover, in that picture, Stefan and Ninam were seemingly wearing a wedding dress, indicating that the picture was from their wedding. 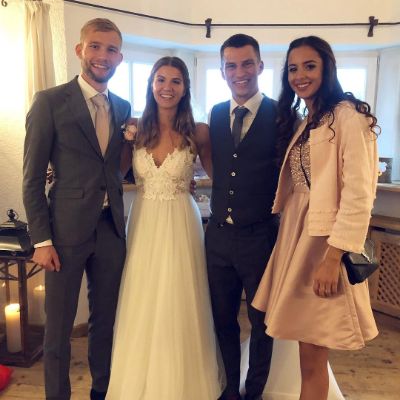 However, without any official confirmation, it cannot be said, with full confidence, that Ninam is Stefan's wife. Furthermore, as Stefan isn't available on any social media platform and Ninam's Instagram handle is private, it is harder to confirm the theory.

Well, until Stefan reveals his relationship, his personal life remains a mystery.