Anastasia Potapova is a Russian tennis player who has a career-high singles ranking of No. 64. Currently, she is ranked No.69 as of 13th December 2021. Furthermore, she is a former junior No. 1 and the  2016 Wimbledon Championships girls' singles champion who has defeated  Dayana Yastremska from Ukraine in the final.

Saratov, Russia native, Anastasia Potapova was born on 30th March 2001, under the star sign Aries. She holds Russian nationality and is of white ethnic background. The twenty-year-old stands 1.75 m (5 ft 9 in) tall.

How Much Is Anastasia Potapova's Net Worth In 2022?

Professional tennis players get paid through various sources such as tournament prize money, appearance fees, endorsement deals and sponsorships, exhibition fees, bonuses, and club tennis deals. Moreover, the ranking, nationality, and popularity of players will determine how much they get paid from each source.

There is no reports if Anastasia Potapova is dating or not. As a matter of fact, the right-handed tennis player has shared less no to infromation about her personal life. 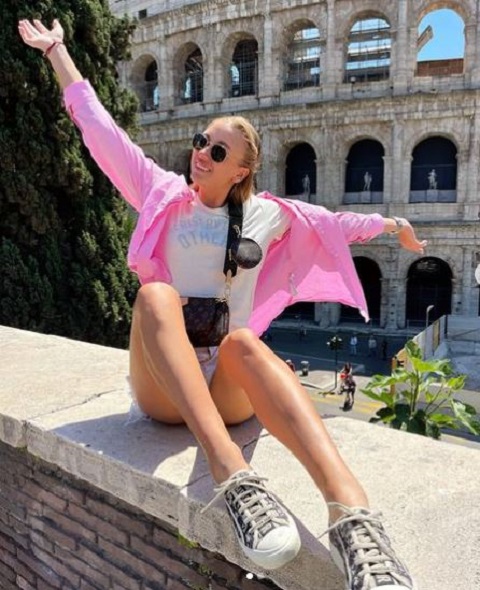 She is pretty famous on Instagram with 93.2k followers on Instagram. Her IG is full with her exotic solo from her games and vacations.

Turned professional in 2017, Potapova made her debut at a WTA event. Further, she was handed another wildcard for the qualifying draw of Wimbledon. She ended the year ranked 242, with a 20–14 win-loss record and eight top-200 wins.

Potapova began the 2018 season with a final appearance at the Sharm El Sheikh 15k event where she reached world No. 769. Then, she played the second WTA Tour main-draw game at the St. Petersburg Trophy. She finally reached her first main-draw win against Tatjana Maria, in straight sets which set up a blockbuster second-round game between Wozniacki and Potapova, a clash between experience and youth. However, she only claims one game against Wozniacki, falling 0–6, 1–6 to end her run.

Potapova played for their first Fed Cup debut for her national side. She lost on her debut against Viktoria Kuzmova. Further, she appeared at the O1 Properties Ladies Cup held in Russia where she ousted the 64th-ranked Monica Niculescu. However, Potapova was unable to close out Niculescu's run as she was defeated by second seed Vera Lapko.

With the help of wildcard, she entered the 2018 Moscow River Cup. She won over two top-100 players to make her maiden WTA final.

Her 2018 season ended inside the top 100 for the first time in her career with a dominating 6–2 win-loss record against top-100 players.

In the 2019 Australian Open, Potapova received entry to the main draw, playing for the first match against Pauline Parmentier. She defeated Parmentier in straight sets, which was Potapova's first match win in the main draw of a Grand Slam tournament. However, she was defeated by 17th seed Madison Keys in the second round.

Due to ankle surgery, Potapova didn't play any more tournaments for the rest of the 2020 season and concluded the season being ranked 100.

At the 2020 Australian Open, she defeated 24th seed Alison Riske in the first round but lost to  Serena Williams despite holding multiple set points in round three.

Moreover, Potapova participated in the first edition of the Phillip Island Trophy where she lost to 16th seed Rebecca Peterson in the first round.

Potapova concluded the 2021 season with first-round defeats at the Kremlin Cup against Simona Halep and the Transylvania Open against Tomljanovic.