Amer Didic is a well-known Canadian professional soccer player. He has been playing in the professional league since 2016. Didic currently plays in the North American Soccer League for FC Edmonton. Amer plays as a center-back for his club and country. Didic has represented Canada in numerous divisions and senior teams.

Amer Didic was born on December 28, 1994, in Seniz, Bosnia and Herzegovina. He is among the two children born to Zehrudin Didic and his wife. His father was a helicopter pilot in the military back in Europe. His family migrated to Canada when Amer was one year old. After graduating from High School, Didic enrolled at Baker University and completed his undergraduate. Didic stands six feet and four inches tall and weighs 89 kg.

Amer Didic has an estimated net worth of more than $500,000. The soccer player earned most of his net worth as his salary and contract from his soccer career. Last season, Amer took home £22,672 while playing in the Candian Premier League. He had a weekly wage of £436. In 2018, Amer represented Sporting Kansas City in the Major League Soccer and took home a base salary of $55,654.20. He is very much early in his career and will be making millions. The player's salary in the League is very low compared to those in the other leagues of Europe and America.

Amer is an active social media user. He is very open about his relationship status with the public. Following his timeline, we can be sure that the Canadian soccer player is dating his longtime girlfriend, Karly Love. The love birds have been dating each other for some time and have not shared their first meeting experience. 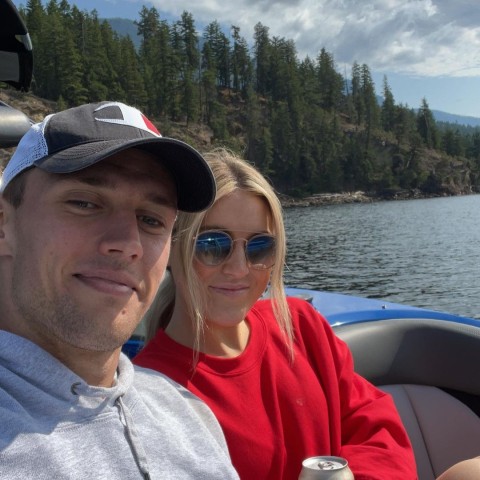 Amer shares a photo with his girlfriend, Kayla at a vacation SOURCE: [email protected]

Amer first posted a photo with Karly in February 2021. They are very close to each other and keep going on vacations regularly. Karly keeps attending Didic's game regularly. Although It's been some time since their relationship, the love birds are yet to get engaged or tie their wedding knot.

Amer started playing football along with his father in their home. His father played football while they were in Bosnia. He was part of the High School soccer team and later enrolled at th FC Edmonton Academy for training. Didic got to play college soccer for Baker University. The player was named an NSCAA and NAIA All-American and the Heart of American Conference Most Valuable Player.

In December 2018, Didic signed with San Antonio FC for a season. However, The team got relegated and the contract was terminated. Amer signed with FC Edmonton and has appeared in forty-five games for the club.