Amanda Balionis is an American sportscaster. First entered the golf space at PGATour.com, she then joined gigs at Callaway and TNT. Now she is reporting for CBS Sports, where she conducts player interviews as well as reports from the grounds at PGA Tour events.

Pittsburgh, Pennsylvania native, Amanda Balionis was born on 20th June 1985, under the star sign Gemini. She holds an American nationality and is of white ethnic background. Along with being a certified yoga instructor, she is the founder of PuppiesAndGolf, which is focused on supporting & promoting shelters across the country with a focus on connecting humans & dogs for a lifetime of purpose and companionship.

Amanda is the daughter of Tony Balionis and Dana Balionis. As reported, her grandparents met through golf, and her parents both play the game as well.

As a child, Amanda began playing golf at the age of 9. Besides, she also enjoyed swimming and playing volleyball

She enrolled at Manheim Township High School. After that, she attended Hofstra University, graduating with Broadcast Journalism.

Amanda Balionis began her career as an Intern at WHRU radio station.

Before, she did an internship at CBS2, ABC News Now, New York Islanders, and New York Jets.

In 2017, Balionis started joined CBS. Also, she was a part-timer golf reporter, working in select tournaments. 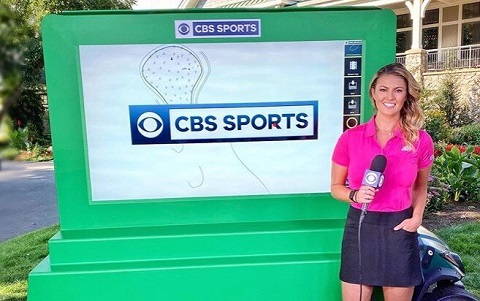 Among other notables, she received widespread praise for her post-round interview with Dustin Johnson when he won the 2020 Masters.

Is Amanda Balionis Married? Who Is Her Husband?

Amanda Balionis is soon to be married. Currently, she is engaged to UNC and NFL quarterback Bryn Renner.

The duo got together for quite some time. They often share their experiences together on their respective social media pages.

On 4th March 2021, Balionsi surprised her fans with her engagement news. Based on the photo she shared on Twitter, it looks like it was a beach engagement. The sportscaster flaunted her ring with the duo twinning the sky blue shirt. She wrote, "Hey
@BrynRenner ...forever sounds kinda perfect." Jer boyfriend, Renner played at UNC from 2011-13 before stints on multiple NFL practice squads. He got into coaching in 2017 and is entering his fifth season as an assistant at FIU.

Besides, Amanda stands 5 feet 5 inches tall and weighs 57 Kg. With an hourglass figure, the gorgeous has black-brown eyes. Her dress size is 8.

How Much Is Amanda Balionis Net Worth In 2022?

Along with a name and fame, Amanda Balionis has amassed a huge fortune through her successful sportscasting career with CBS. Neither the network nor Balionis has revealed her true figure of salary, she is believed to be making $70,000 to $100,000 per annum.

Besides, she also did commercials for the Supreme Golf app. As of 2022, her net worth is approximately $0.5 million.