One of the top five professional golfers ranked by the Official World Ranking, currently playing in the PGA Tour is an American national Dusting Hunter Johnson. He has established himself as one of the longest drivers on the PGA Tour.

Dustin had the third-ranking in the driving distance sets for three consecutive years from 2009 to 2011. He has been in professional golf since 2007. Within less than a decade time in professional golfing, he has established his name as one of the accomplished and a very talented golfer in the history of Golf.

Net Worth and Earnings of Dustin Johson

Dustin Johnson has an estimated net worth of $20 million, as of 2021, including all of his earnings and incomes. Over his career on the PGA Tour, Dustin Johnson had raked in over $41 million on the course alone.

He has endorsed Adidas since 2007 and inked an extension last year. His other endorsing partners include TaylorMade, NetJets, BodyArmor, New Era, and Hublot.

In 2013, he sold his house for $530,000, which is located in Myrtle Beach, South Carolina (SC), US. Later two years, he purchased a $4.95 million home in Palm Beach Gardens, Florida. His mansion is more than 8,000 square feet–butts up against the Intracoastal Waterway about 80 miles north of Miami. The interior defines luxury with five bedrooms and 6.5 bathrooms, but possibly the most luxurious feature of the lot sits outside: a private island.

Personal Life of Dustin Johnson; Is she Married?

Moving onto his personal life, Dustin comes into conversation about his personal life as he does for his profession. His conduct has been closely observed by golf enthusiasts. He is often seen in Jupiter Fla bar which is near his home and is known to have sexual indiscretion with at least one wife of the PGA Tour Player.

Currently 34, he is engaged to his girlfriend Paulina Gretzky, who is the daughter of hockey legend Wayne Gretzky. 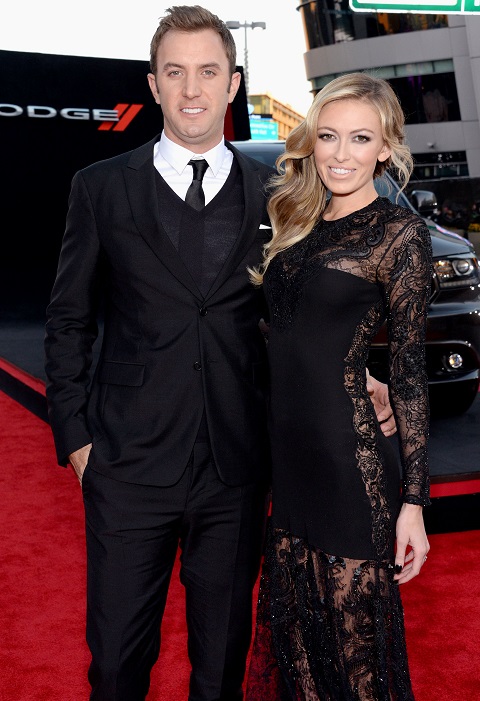 They had been dating since January 2013 and got engaged on 18 August 2013. He is the father of a son, born on January 20, 2015. The couple is planning to get married very soon. Furthermore, they have two sons, Tatum Gretzky Johnson and River Jones-Johnson.

Prior to that, he was in relation with Amanda Caulder who was his college girlfriend. However, some sites also have reported his dating with Natalie Gulbis. Dustin had denied the rumors stating they had spent some time together but were not in relation.

Dustin has a growing fan base and he is one of the top golfers in the world. A lot of keen eyes are on him to know more about him as his fans, his well-wishers, as a reporter, etc. He can be followed on Twitter and Facebook which will allow him to get updated with his recent activities and get in touch with him. Besides, the different internet websites including Wikipedia, pga.com, etc locates his biography, his career statistics, news, rumors and gossips about him, etc.

Dustin Johnson was born on 22 June 1984 in Columbia, South Carolina, United States. He stands at the height of six feet and four inches tall weighing 86 kilogram. He has American nationality and belongs to white ethnicity.

Born and raised in Columbia, South Carolina, he completed his studies there. During his collegiate career, he played for the Coastal Carolina University winning the Monroe Invitational and the Northeast Amateur in2007. For an amateur then, winning the game and holding the title is a great achievement and boost to move further. He also played in the teams that had won the 2007 Walker Cup and Palmer Cup.

During the end of 2007, he turned out as a professional golfer and earned his first PGA Tour card in 2008 finishing in 14th position at the 2007 qualifying School in December. He won his first PGA Tour event, the Turning Stone Resort Championship, toward the end of his rookie season. After four months from then, he won his second event at AT&T Pebble Beach National Pro-Am.

After turning professional, he quickly established himself as one of the competitive and talented golfers in the golf course. By the end of the 2009 season, he was ranked 15th on the PGA Tour money list which is quite an impressive achievement within just a couple of years of debuting in PGA.  Dustin Johnson has won 9 of the PGA Tours, Wendy’s 3-Tour Challenge, and The Shark Shootout in 2010 after his professional debut.

Sports always deal with injuries due to physical involvement. Dustin Johnson also could not be devoid of the injuries leading him to miss several of the championships, playoffs, and Tournaments. He also faced suspension three times for failing the tests against drug use, one was in 2009 against marijuana and two for cocaine in 2012 and 2014. He is a good friend of Tiger Woods.