Christian Darrisaw is an American football offensive tackle who finished his collegiate career playing for the Virginia Tech Hokies in ACC. A promising blocker with tons of experience against top competition under his belt, he declared for the 2021 NFL Draft, forgoing his senior season. He is projected to be among the first offensive tackles picked.

Petersburg, Virginia native, Christian Darrisaw holds an American nationality and is of Afro-American ethnic background. His date of birth is not available. Further, he stands 6 ft 5 in (1.96 m) tall and weighs.

Christian Darrisaw enrolled at Riverdale Baptist School. Before transferring to Virginia Tech, he played a season at Fork Union Military Academy. At Virginia Tech, he was a starter at left tackle in his freshman season in 2018. Also, he started every game in 2019 and 2020, earning the first-team All-ACC team during the latter.

Forgoing his senior year, he declared for the 2021 NFL Draft, announced via social media. He is projected to be among the first offensive tackles selected.

Virginia Tech Hokies' offensive tackles, Christian Darrisaw have been one of the nation’s best players at his position, helping boost his draft stock and set himself as a possible first-round prospect in the upcoming draft. If he acts as well throughout the predraft process as he has on the field this season, Darrisaw won’t have to wait long to hear his name called in April. 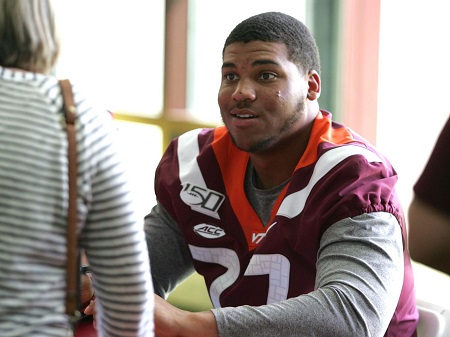 PFN Chief Draft Analyst and NFL Insider, Tony Pauline ranked 6-5, 314-pounder as his fifth offensive tackle. Pauline gives him an overall ranking of 32 and a second-round grade. fit with the Los Angeles Chargers, Indianapolis Colts, and the Pittsburgh Steelers.

How Much Is Christian Darrisaw Net Worth In 2021?

As a matter of fact, college athlete does not get paid. It is against NCAA rules for any athlete to receive compensation for playing a sport. However, the college athlete receives a scholarship that covers their tuition fee and other bills as well.

Since Christian Darrisaw is yet to turn professional, he has not made any money playing for the college team. Already declared for the 2021 NFL Draft, he is projected to be among the first offensive tackles selected. If things go as per projections, he will earn a tremendous salary from the NFL team.

When it comes to his personal life, Christian Darrisaw is a quite confidential person. There is less to no information about his love life, not even his relationship status. Active on Instagram with over 3k followers, his IF features only football posts rather than loveydobby. For now, the hunk is believed to be single.