Ali Hadi Al-Bulaihi, a.k.a Ali Al-Bulaihi, is a Saudi Arabian professional footballer currently signed to Al-Hilal as a defender. Since 2018, the young talent has been in the Saudi Arabia national team and capped four times.

Bulaihi was also a member of the 23-man squad selected to represent Saudi Arabia in FIFA World Cup 2018.

Al-Bulaihi has not disclosed information about his childhood, parents, siblings, and academic background.

Ali Al-Bulaihi has an estimated net worth of more than $1 Million. The player has earned most of his net worth through his football career. Besides, he also makes a decent sum through the endorsement deal, sponsorships and salary from the national team. 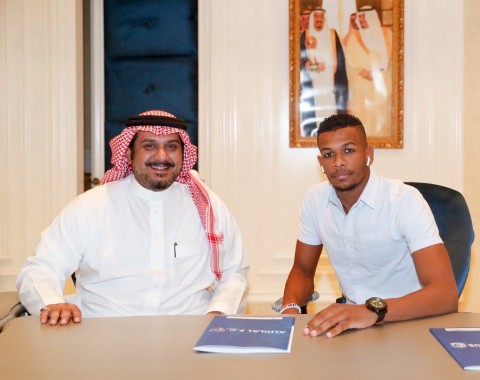 Ali Al-Bulaihi'sexact figure of net worth is under review. His market value is recorded at $91,086. He is very early in his career and will be adding millions in the future.

In 2014, Ali Al-Bulaihi signed to Al-Nahda, where he stayed for a short period and did not play any game for the club.

The following year, he switched to Al-Fateh. He played 47 matches and scored a goal for the club in his two-season career with Al-Fateh. Also, Al-Bulaihi was a team member who played in the AFC Championship League in 2017.

On June 2, 2017, Al-Bulaihi signed a three-year contract with Al-Hilal, agreeing on a free transfer. Upon his arrival, he was assigned the jersey No. 5. In his debut season, he played five matches overall for the club. The player has appeared in eight-three matches to date and scored ten goals for the club.

In 2018, Al-Bulaihi earned the first call-up to the Saudi Arabia national team. In May 2018, he was named in Saudi Arabia's 35-man squad along with his teammates Salman Al-Faraj, Yasser Al Mosailem and Osama Hawasawi for the 2018 World Cup in Russia. Since his debut with the national team in 2018, ALi has appeared in thirty international matches.

Star footballer Ali Al-Bulaihi prefers to maintain his personal life low-key like other celebrities. No doubt, he is often surrounded by his female fan, but he has not been spotted with a lady in public who is assumed to be his potential girlfriend or spouse. Also, Al-Bulaihi is inactive on social sites such as Instagram, Facebook, and Twitter.

Hence, he might be single and unmarried, as per our records.