Alexander Bah was born Alexander Hartmann Bah on December 9, 1997, in Arslev, Denmark. He rose to fame only after his successful career and kept his personal life away from the media. Bah  is of Gambian descent. Alexander completed his primary level education from efterskole and played for the team. Talking about his physical appearance, Bah stands six feet and height and weighs 70 kg.

Alexander started playing football for his hometown club Aarslev Boldklub. His youth career started playing for the FC Fyn in 2009. He was part of the football club until the club went bankrupt in January 2013. The player then moved to Naesby Boldklub and trained with its youth team until 2014. 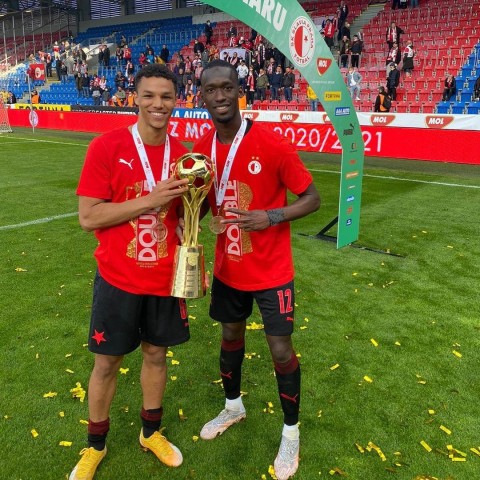 Alexander shares a photo with his friend with title SOURCE: [email protected]

In late 2014, Bah moved to Ikast FS but later moved back to Naesby to earn his senior team debut in 2016. He had to struggle in his initial days to appear with the team. Alexander made six assists in 16 appearances in the third-tier Danish 2nd Division. In August 2016, The player moved with HB Koge and signed a three-year contract. In November 2017, Bah was named the "Talent of the Year." In the two-season, Alexander appeared in fifty-nine games scored eight goals.

Bah's contract with Koge finished in early 2018, and SonderjyskE offered him a five-year contract until 2023. He arrived at the club as a right-winger but largely played as a right wing-back with great success. In the next three seasons, The player scored six goals while appearing in fifty-eight games. Before his contract ended, Alexander moved to Slavia Prague in the Czech Republic and signed a  four-and-a-half-year contract with a  club-record fee reported to be around DKK 13 million.

Alexander has represented Denmark in numerous Divisions. He earned his first major call in 2017 for the U20 team and earned four caps for the team. In the middle, Bah played for U21 and earned his senior team call in 2020. He scored his first international goal against Sweden in November 2020.

Who is Alexander Bah's Girlfriend? Know About His Relationship Status

Alexander is not much open about his relationship status. Following his timeline, we can be sure that The Danish football player is dating his longtime girlfriend, Nathalie Viktoria. The love birds have been together for some time and a very supportive of each other.

Alexander Bah has an estimated net worth of more than $200,000. He credits most of his net worth to his successful career in football. As per sources, Bah has an annual salary of £182,000 with Slavia. The player is very early in his career and will be making millions in the future.