Alex Morgan is an American soccer player, Olympic gold medalist, and FIFA Women's World Cup champion who plays as a forward for Orlando Pride in the National Women's Soccer League. She along with Australian player Steph Catley and Canadian Christine Sinclair appeared in the covers of FIFA 15 and became the first women soccer players to do so.

She married her long-term boyfriend, Servando Carrasco on 31 December 2014. She has an estimated net worth of $3 million.

Alex Morgan has an estimated net worth over $3 million in 2019, including all of her properties and earnings. The majority of Morgan’s earnings likely comes from endorsement and sponsorship opportunities as well as from her soccer career.

Morgan’s salary as of 2019 is likely slightly higher as salaries tend to rise each season.

As she’s a prolific goal-scorer for the United States Women’s National Team, she has won many titles and awards.

Apart from her earnings from football, she has endorsement deals with countless big-name companies. Her biggest deals are with Nike, Panasonic, and Coca-Cola, but she has struck up partnerships with plenty of other companies. More than that, she is also involved in several television commercials and makes over $3 million annually. 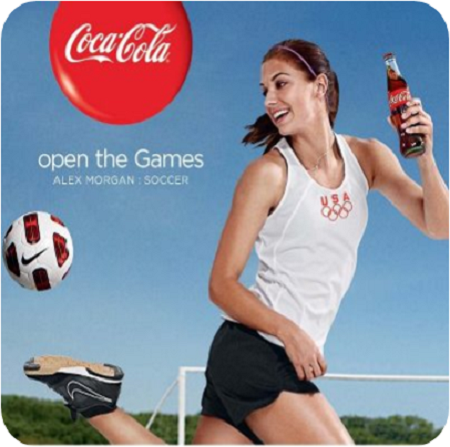 Her other endorsement deals include:

Back in 2015, she was named the highest-earning American soccer player due to her huge endorsement earnings.

Alex Morgan got married to her loving partner, Servando Carrasco on 31 December 2014. Her spouse, Servando is a Mexican and is also a popular soccer player. The couple tied their knots among their family and friends.

Alex and Servando dated for about seven years before getting married. 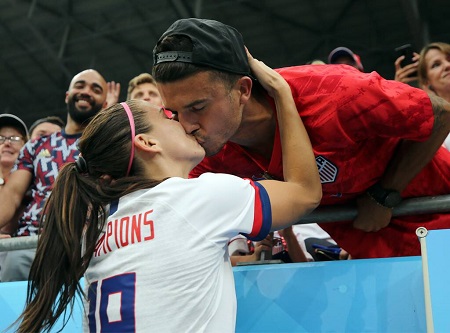 They previously played for the clubs in the same city and lived together. They also bought a house. However, her husband's contract was declined by the club and had to join the other club. The couple now lives in a different city and Morgan stated that it is hard for her to live without her husband.

Alex Morgan is also called “Baby Horse” because of her speed, accuracy, and devotion towards the game. She is really a sparkling star of her team.

Her body measurement is 32-26-35. Her shoe size is 8. She has a perfect height of 5 feet and 7 inches and her total body is weight is 62 kg. She is also socially active on Facebook, Twitter, and Instagram.

From an early age, she started playing soccer games. At the age of 17, she gets the golden opportunity to be a part of United States under-20 women’s national soccer team. She also played for the California Golden Bears. She joined Western New York Flash (2011), Seattle Sounders Women (2012), and Portland Thorns FC (2013-2015). At present, she is associated with the Orlando Pride.

She was subsequently named U.S. Soccer Female Athlete of the Year and was a FIFA World Player of the Year finalist in 2012.  In the final, a 2–1 win against Japan on August 9, Morgan assisted on a Carli Lloyd header. Morgan, along with Canada's Christine Sinclair and Australia's Steph Catley, became the first women's soccer players to appear on the cover of FIFA video games in 2015. She appeared alongside Lionel Messi and Cristiano Ronaldo on covers of FIFA 16 sold in the United States. 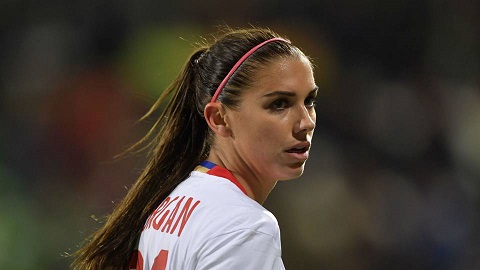 If we talk about her Intl. stardom then we come to know she is an achiever in her Intl. game. In the year 2012, on summer Olympic Games, she bags her first Olympic gold medal. She played against Japan in the World Cup final where she scored the first World Cup goal coming on as a substitute.

She was also honored by several national and Intl. awards. She won her first World Cup with the national team in 2015. In addition, she has also received several individual awards so far. She was also the finalist of the FIFA World Player of the Year in 2012 and was included in the second-best XI in the NWSL in 2013.

In 2019, Morgan was also the member of the US national team that won the gold medal in the FIFA Women's World Cup.

Alex Morgan was born as Alexandra Patricia Morgan on 2 July 1989, to American parents, Pamela S. and Michael. She was born and raised in the beautiful city of San Dimas, California, the United States along with her two elder sisters Jeni & Jer. Presently, she is associated with the Orlando Pride.

Her ethnicity is white and her birth sign is cancer. She attended Diamond Bar High School and further attended the University of California, Berkeley.