Alex Hammond is a well-known British Television presenter. The multi-talented presenter is also a reporter and columnist. Alex has been working for Sky Sports Racing and Sporting Life. Hammond started working in the Television Industry in 1998 with the Racing Channel.

Alex Hammond was born on May 13, 1974, in England. She rose to fame only after her successful career; so much about her parents and early life is still under the radar. Hammond is yet to utter a single word about her education and academic qualification.

Broadcasting Career in the Television

Alex started working as a secretary and work rider for respected racehorse trainers Jack and Lynda Ramsden in Yorkshire. She did not get much satisfaction from her work and tried to change her field. Hammond always had an interest in the broadcasting sector. In 1998, Alex tried her luck and had not regretted her decision since then. 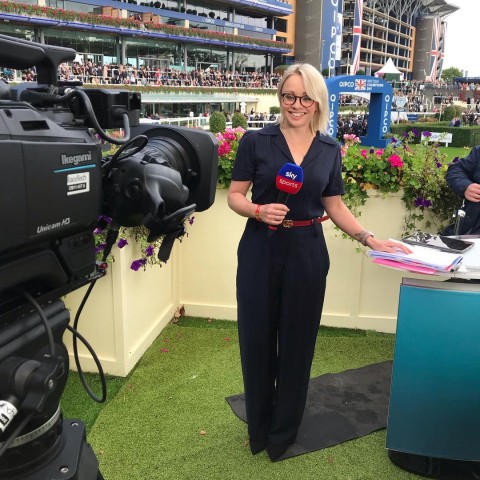 Alex has been working in Sky Sports for a longtime SOURCE: [email protected]

Hammond joined The Racing Channel in 1998 and officially began her career. After working with the team for more than five years, Alex moved to Sky Sports in 2003. She specialized in racing and eventually became a Good Morning Sports fans fixture. Hammond presented features on Sky Sports News' "Good Morning Sports Fans" schedule, from 6.00 am to 10.00 am.

Alex has presented Sky Sports coverage of the Horse of the Year Show and covered the role of a track reporter for the At the Races channel. She is among the longest-serving presenter working in the news station. During her career of almost two decades, The reporter has interviewed notables, including Scottish football manager and player Sir Alex Ferguson, Sir Bobby Robson, Mick Channon, Frankie Dettori, and many more.

Hammond is currently working as the lead presenter for Sky Sports Racing. The channel was launched in 2019 after working with the channel for more than fifteen years.

Alex was an avid horse rider in her early days. She has over 50 rides as an amateur jockey. As per sources, The presenter raced in Ascot’s valuable Diamond Race on a horse part-owned by Jimmy Tarbuck. In 2013, Hammond rode at the Patrick's Day Derby.

Although Alex is very much successful in her professional career but is not lucky in terms of her love life, Hammond married her longtime boyfriend, Richard Quinn, for three years. The duo walked down their wedding aisle in July 2007. They had been seeing each other for some time before their marriage. The love birds had a beautiful and lavish wedding ceremony in front of parents and friends.

Alex and Richard could be seen very much supportive of each other, but the relationship ended in 2009, and they moved on. None of them have shared the reason.

Alex Hammond has an estimated net worth of more than $2 Million. The average salary of a TV presenter and reporter in the United Kingdom is more than $55,000. Alex is among the oldest TV presenter working for Sky Sports. She must be making in six figures. Alex is very much private about her economic career.