If you love watching Ice Hockey, Alex Cavallini must not be a new name. Alex is a well-known American Ice Hockey player. She has been playing at the professional level for more than ten years. Cavallini was part of the team that won the gold medal in the 2019 Olympic Games.

Alex Cavallini was born Alexandria Rigsby on January 3, 1992, in Delafield, Wisconsin. She rose to fame only after her successful career so, much about her parents is under the radar. Talking about her physical appearance, Alex stands five feet and seven inches tall and weighs 70 kg.

Alex started playing ice hockey at the age of six. She did not have a girls team to play and train with them, so Cavallini started playing with the AAA boys hockey from 10. In her freshman year, The player played for the Chicago Mission AAA Boys Bantam Majors, helped the team win the state and regional champions, and participated in the USA Hockey National Championships. After graduating from High School, Alex received numerous offers and chose to play for the University of Wisconsin. In her rookie year, She ranked third in the WCHA with a 1.86 goals-against average and is fifth in league with a .919 save percentage. In 2011, Cavallini made 29 saves against the defending NCAA champion Minnesota-Duluth Bulldogs. In her senior year of University, Alex had the program's all-time leader in wins with 100, minutes played with 7,881:09 and saves with 3,126.

Alex has represented the United States in numerous divisions. She earned her first call in 2009 for IIHF Under 18 Women's World Championship. She earned a gold medal in the competition. Cavallini made her appearance in the World Championships in 2013 and earned her second gold medal. After winning a gold medal in the 2018 Olympic Games, the player reached her pinnacle. She has seven gold medals and one silver medal representing the United States.

In 2018, Alex listed her name for the CWHL draft, and Calgary Inferno drafted her in the fourth round. Also, In 2021, She participated in the PWHPA Dream Gap Tour event at New York's Madison Square Garden.

Alex is married to her longtime boyfriend, Aidan Cavallini. The love birds walked down their wedding aisle in June 2019 at a private wedding ceremony in front of their parents and close friends. They had been dating each other for some time before their marriage. 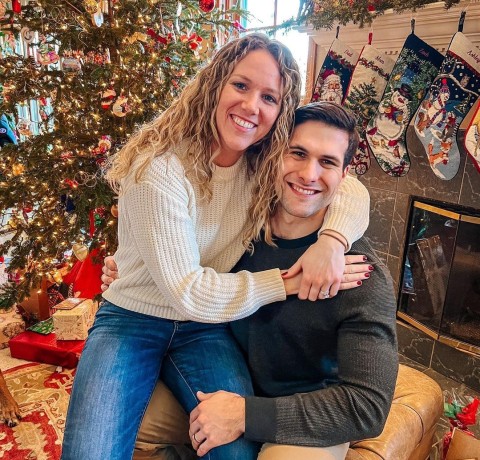 Alex shares a photo with her husband in Christmas SOURCE: [email protected]

Aiden is also a professional Ice Hockey player and met each other in a hockey game. Although It's been more than two years of their marriage, they are yet to welcome a new member to their family.

Alex Cavallini has an estimated net worth of more than $1 Million. She has earned most of her net worth through her successful career in Ice Hockey. Alex gets paid a handsome amount for representing the states in numerous events. Cavallini has been playing in the CWHL with Calgary for an undisclosed fee. The average salary of a player is more than $2.5 Million.